Published June 8th 2022
Is fashion becoming the main purpose of vapes? We hope not! But in this article we take a closer look at whether vapes can be fashionable. 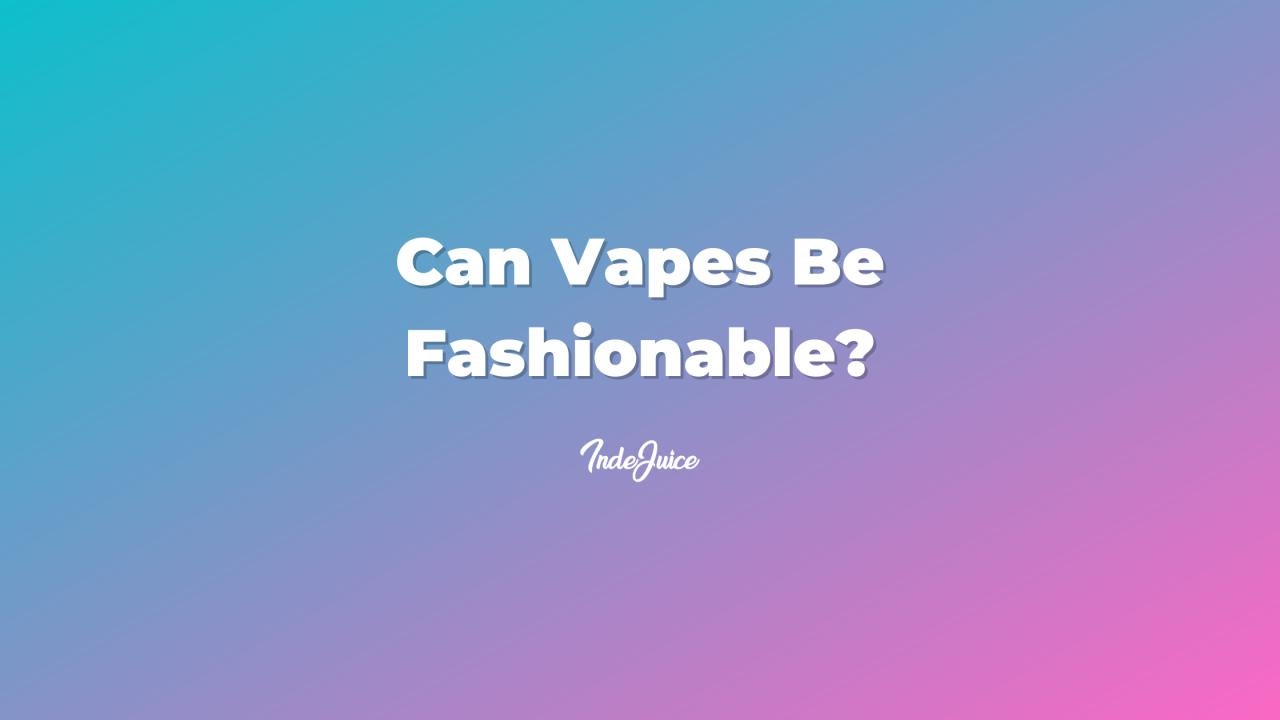 If you're trying to quit smoking, vape devices can be a more fashionable accessory.

From all the images of sexy, appealing individuals who light up a cigarette in movies, smoking is perceived as a habit of affluent, influential people - but we don't think so - nicotine addiction is certainly not fashionable! Many individuals have switched from traditional cigarettes to electronic cigarettes since the invention of the e-cigarette. Companies that manufacture and sell disposable e-cigarettes have recently focused on the item's aesthetics. For some, vaping is a fashion trend, and vapers are considered hip (again, we do not agree). Aside from its appearance, there are numerous other explanations why a vaping device has become a trendy accessory.

We are constantly surrounded by technology or other electronic devices that scream modernity. A user's social standing reflects how up-to-date and fashionable someone is. Vaping devices are one of these nouveau, alluring gadgets. Besides being less harmful than tobacco cigarettes, vaping is also mistakenly considered a fashion trend by many. Furthermore, many older people regard vaping to be modern and trendy, thus encouraging the majority of 40-year-olds to switch from traditional cigarettes to vapes instead. State-of-the-art vaping devices are conveniently accessible in a multitude of appealing forms and colours that reflect the flavour.

While you vape, you produce vapour that may be exhaled in various ways. Vaping tournaments arose from this, where vapers meet to see who can exhale the most vapour to create spectacular forms or just the largest smoke cloud, these are known as vape tricks. Many vapers that participate utilise zero nicotine vape juice on a daily basis, which turns vaping into a pastime rather than a compulsion due to addiction. It is essential to keep in mind that vaping mods and pens may be customised and available in various colours and patterns. While a cigarette is a cigarette, not all vapes are made equal. When someone vapes, they may personalise the vape to symbolise them. Moreover, vape mods are available in a range of flavours for smokers.

Despite the pursuit to dismiss vaping as a method to flaunt its trendiness, the vaping culture continues to expand. With the debut of the e-cigarette, it has grown from when smaller groups started, vaping has made its statement globally, notoriously known as a healthier substitute for smoking regular cigarettes. Networks meet together in secret for whatever reason they choose this lifestyle, which gives rise to the vaping subculture. Vaping as a form of connection brings people from all walks of life together. It is common to see people wearing sweatshirts with a laid-back, easygoing demeanour at vaping tournaments. The sector has grown daily as more individuals become aware of vape culture.

However, let us not forget the reason for vaping. That is to help smokers quit smoking cigarettes and reduce the health risks. Vaping is deemed 95% less harmful than smoking. However, we do not recommend anyone start up vaping if they have never smoked.

Learn more with our articles will your clothes smell if you vape and can you vape in a hospital?