Published May 19th 2022
This article discusses if it's better to vape or smoke. Read below for more information on what happens you your body, when you quit smoking. 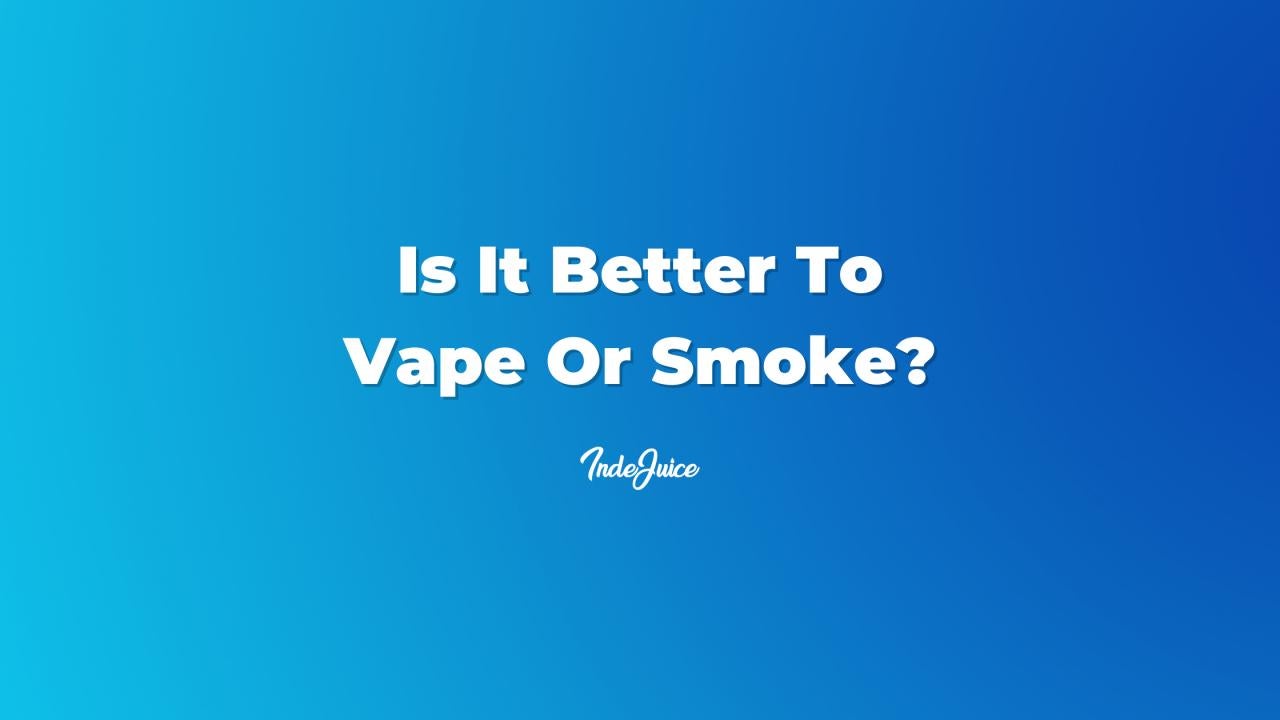 It is better to vape as this has less risk of producing any smoking-related illnesses.

The main difference between smoking and vaping is that smoking will deliver the nicotine by combusting tobacco, leading to smoking-related illnesses. Vaping can provide nicotine by heating e-liquid, which is less harmful.

When smoking traditional cigarettes or tobacco, your health is at risk. The dangerous toxins produced by burning tobacco can affect the user's health, such as carbon monoxide and tar, making them unwell.

When stopping smoking, you will immediately start to see and feel the health benefits. Most users find that slowly cutting down their nicotine intake by using disposable vape devices is the easiest way to quit smoking but quitting smoking and vaping should be the end goal.

What Happens When You Quit Smoking And Start Vaping?

There are many benefits that people can enjoy when switching from smoking to vaping such as; better physical health, longer life expectancy, and improved taste. These changes can happen almost immediately.

As soon as you quit smoking, you will start to feel a slight improvement in your body. Within the first 8 hours, the oxygen levels in your blood will begin to return to their normal levels, even if you have already started vaping. Vaping does not produce carbon monoxide like a traditional cigarette, meaning that your body can begin removing the carbon monoxide inhaled by smoking, which will leave more space for oxygen in the blood.

After the first 24 hours of switching from smoking cigarettes to vaping, most of the Carbon Monoxide in your system will be gone. Your lungs will repair themselves and start healing, removing any toxic mucus or debris built up from smoking.

After 48 hours, you will notice a significant change in your sense of taste and smell. Swapping smoking for vaping will drastically improve your sense of smell and taste which means your favourite foods and drinks will become more enjoyable. This is possible due to your body repairing the receptors in your mouth and nose that were damaged from smoking.

After experiencing drastic improvements to your health just after the first 48 hours, it should be no surprise that after 72 hours you are feeling better. Those who switch from smoking to vaping report that they have noticed a significant improvement in their breathing, which is expected as you are no longer inhaling harmful substances that can affect your breathing.

After not smoking for 3 to 9 months, you will notice that coughing, wheezing, and hollow breathing have, then nicotine's effects are now a thing of the past. After this amount of time, the lungs should be able to function as usual after the abuse from tar, toxins, and harmful chemicals.

After five years of quitting traditional smoking cigarettes, the risk of having a heart attack is now lowered by at least 50%. The longer you go without smoking, the lower the risk will be and if you have replaced smoking with vaping, you should not worry, as vaping is at least 95% less harmful than cigarettes.

By 10 years, you will have lowered the risk of cancer by at least 50% from when you were a tobacco smoker. The risk of heart attack is reduced significantly, similar to those who have never smoked or vaped. If you are still using e-liquid that contains nicotine, then nicotine's effects on the heart are very similar to those of caffeine.

Is E-Cigarettes Worse Than Cigarettes?

No, studies show that vaping e-cigarettes is at least 95% less harmful than smoking traditional cigarettes, making vaping a much safer alternative to tobacco cigarettes.

E-cigarettes have the potential to help adults kick in the habit of smoking cigarettes and can help swap this out for a much safer alternative to smoking. This does not mean that e-cigarettes are entirely safe. E-liquids generally contain much fewer toxic chemicals than traditional cigarettes, such as tar and carbon monoxide.

Although e-liquid can have some harmful substances including nicotine and volatile organic compounds, e-cigarettes are still much safer and less harmful than smoking cigarettes.

Learn more with our article how does vaping damage your brain?