Published October 27th 2021
Is the new Caliburn G better than the original UWELL Caliburn? Find out with our specialist UWELL Caliburn comparison and review. 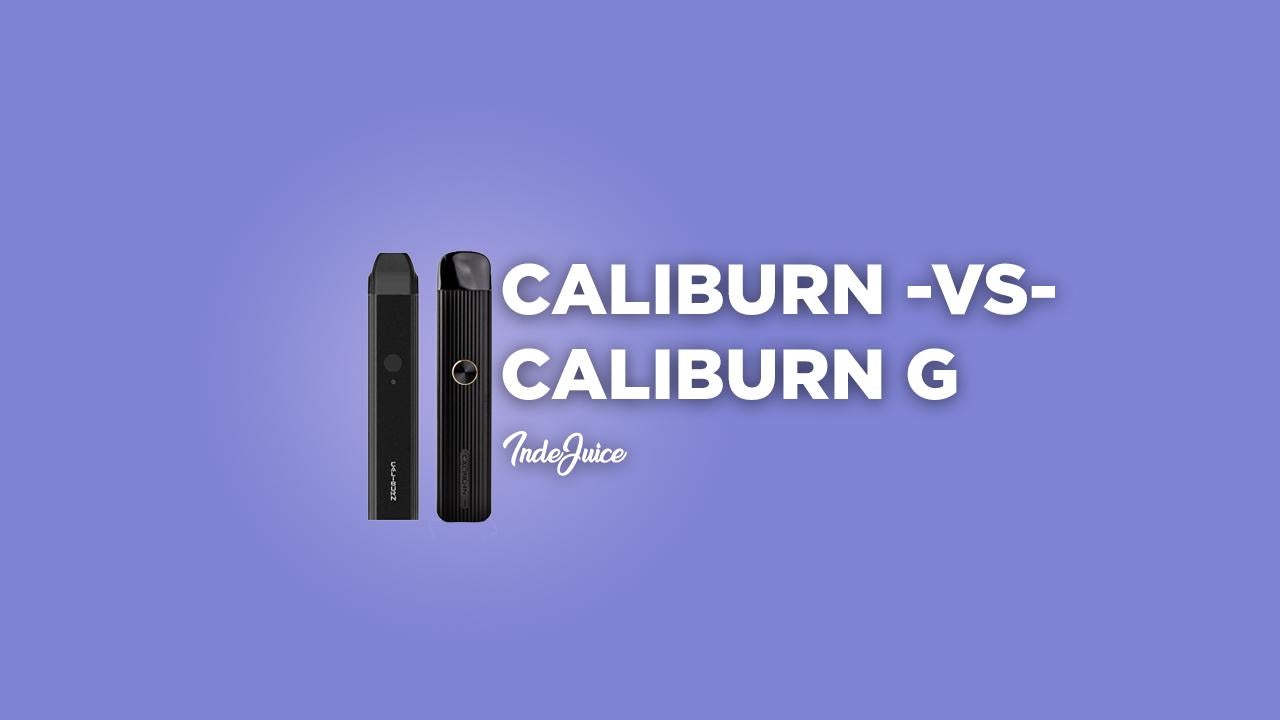 The UWELL Caliburn Vape Kit and Caliburn G vape devices are fantastic vape kits manufactured by the vaping giant UWELL. UWELL was first established in 2015 in Shenzhen, China. UWELL are committed to providing vapers with high-quality, innovative products striving to become one of the most reputable leaders in the e-cigarette industry.

UWELL has stuck true to their word by producing two of the most popular vape products: the Caliburn and Caliburn G. These popular devices allow vapers to experience different vaping styles.

Caliburn and Caliburn G are also ideal choices for smokers who want to make the transition to vaping.

The UWELL Caliburn pod system is part of UWELL's A-Series, including the Caliburn, Caliburn A2 and Caliburn KOKO in its product line of pod systems.

The UWELL Caliburn G is part of UWELL's G-Series, with the Caliburn KOKO Prime within its product range.

The UWELL Caliburn and Caliburn G vape devices are both beautifully simple devices. These pod systems are fantastic for new starters due to their simplicity and an excellent device for experienced vapers, as it offers everything a vape needs. Its thin, streamlined body allows it to fit perfectly in your hand, pocket or handbag easily.

The Caliburn and Caliburn G are almost the same sizes, with some minor changes. Both devices are stylish, lightweight and compact.

Below we will discuss the differences between the designs and features of both the Caliburn and Caliburn G.

The Caliburn is made out of a sturdy Aluminium Alloy, which gives this pocket-size device ultimate strength, so it won't break if it falls on the floor. The Caliburn is available in 6 smooth colours, Black, Red, Grey, Iris Purple, Blue and Pink.

The Caliburn G has ridges throughout the whole body to enhance the grip of the device. The Caliburn G is available in 6 colours, Black, Blue, Green, Grey, Red and Rosy Brown. The Material is made of Aluminium Alloy, the same as the standard Caliburn, to ensure strength and sturdiness.

The Caliburn has a 520mAH battery capacity and a max output wattage of 11 Watts. Depending on how much you vape, of course, the battery life should last you at least a day. The Caliburn battery can be recharged using a micro USB charging cable. You can find the charging port at the base of the device.

The battery can be recharged using a USB-C cable, which charges a lot faster than the micro USB in the original Caliburn.

The Caliburn has a firing button, which can be used when inhaling. However, what's great about the Caliburn is that it also has an auto-activation draw mechanism, which you can inhale with no need to use the firing button to vape.

The LED light is positioned just under the firing button. When you inhale, the LED light will light up continuously. The light on the device also reflects how much battery life you have. The three battery status colours are Green (full charge), Blue (medium charge), and Red (low charge).

The Caliburn G LED light is positioned near the bottom of the device and is much smaller than the original Caliburn, which may be a little more challenging to see when vaping.

These Caliburn Pods incorporate a top-filling mechanism. Once you are ready to fill your pod, you simply take off the drip tip and fill down either side holes on your pod with your desired e-liquid (not the middle hole). These pods are best used with higher PG ratio e-liquids or 50/50 VG/PG ratio e-liquids for a mouth to lung style vape.

Once the pod has been refilled, the solid magnetic connection secures the pod to the body.

The coils come in two resistances: Caliburn G 0.8ohm coils and 1.0ohm coils. These are both mesh coils to really enhance the flavour of your e-liquid to give you an all-around better vaping experience.

The 1.0ohm coil is perfect for MTL vapers, similar to that of the 1.2ohm KOKO pods in the Caliburn. However, the 0.8ohm coil gives you a more restricted Direct to Lung (DTL) vape, and higher VG e-liquids can be used for a more satisfying flavour, and a decent throat hit.

Please note that using the 0.8ohm coil will require more power. Therefore your battery and e-liquid will be depleted much quicker.

The mouthpiece of the Caliburn kit fits perfectly into the mouth and can quickly and easily be taken off when it needs to be refilled.

The mouthpiece of the Caliburn G kit is a little bit wider, and the more rigid plastic makes it more challenging to take off. Although this can be frustrating, it does ensure that your pod has no chance of coming loose.

The Caliburn has a fixed airflow setting, with two airflow inlets on either side of the device, which gives a loose, airy vape that is perfect for Mouth to Lung (MTL) vaping.

UWELL has made some slight improvements to the Caliburn G and has given two airflow options. These can simply be accessed by rotating the Caliburn G pods. One set gives an airy, loose vape similar to that of the Caliburn, whilst the other option provides a much tighter, restricted draw.

Which Is Better, The Caliburn or Caliburn G?

Both the Caliburn and Caliburn G are fantastic pieces of kit, however, in our eyes, there's one clear winner, and that is the original Caliburn. Its simplicity and design is second to none and will allow you to achieve everything you want and need in a starter vape kit.

Whilst the Caliburn G is a fantastic device, we do not believe that the faster depletion of e-liquid caused by the lower resistance Caliburn G coils is proportional to any real performance gain that UWELL claims. In other words, the Caliburn G uses more e-liquid for no real noticeable improvement in the vaping experience.