What Are The Mental Effects Of Vaping?

Published May 18th 2022
This article discusses the mental effects of vaping and any changes you can expect along your vaping journey. 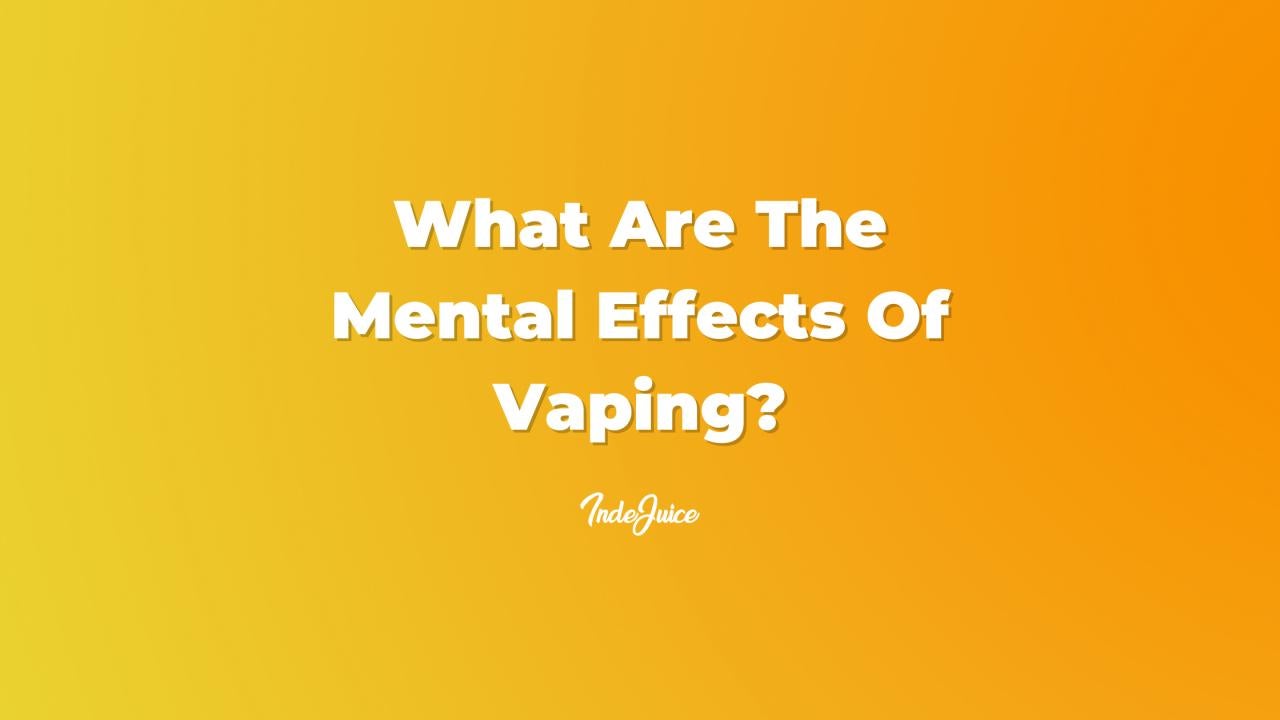 What Are The Mental Effects Of Vaping?

If vaping with or without nicotine in the e-liquid, vaping has been shown to impact the user's mental health, especially in younger adults who are still developing. Some of the mental health risks from vaping include; Mood disorders, Permanent damage to parts of the brain responsible for your memory, Not being able to have complete control over your emotions, and vaping can even affect a user's critical thinking.

Although studies show that nicotine has no direct cause of affecting mental health, some research has found some troubling links between vaping, nicotine, and symptoms of depression and anxiety.

Current vape users have doubled the chances of having an episode of depression compared to people that have never vaped. Studies have shown that frequent vaping is tied to higher odds of a user having a diagnosis of depression. Those who vape more frequently are more at risk of experiencing this and these depressive episodes include spells of feeling majorly sad and sometimes even crying.

Nicotine use is significantly associated with affecting a user's mental health. It is essential to prevent anyone, but young adults especially, from starting to smoke or vape. It is important to try and help users who already have a nicotine addiction to quit as soon as possible. Not only will stopping break the habit and dependency on nicotine and reduce health-related risks from tobacco-related products, but it can also improve mental health.

Quitting smoking has been found to lower the levels of anxiety, depression, and stress and improve the mood of the user positively compared to those who continue to smoke or vape.

Can Vaping Cause Personality Changes?

Like any other addiction, nicotine addiction can affect the physical and mental health of the user.

The concerns over physical health usually overlook the impact on a user's mental health. Still, it is essential to consider the mental health risks of vaping just as much as the physical risks. It has been found that some of the nicotine content in some e-liquids is higher than the nicotine levels in some cigarettes containing tobacco which can cause a user to become more addicted to nicotine than they have before.

Dependence on nicotine in young adults has been associated with causing impulsivity, mood disorders, anxiety, and depression. Nicotine is a highly addictive substance, and it is reported to affect certain regions of the brain that poses a risk of long-term damage.

Nicotine has been found to increase a user's sensitivity to stress and changes the way the coping mechanism in the brain works; these changes lead to you being dependent on these substances meaning there is a much higher risk of experiencing personality changes due to vaping.

Learn more about health subjects related to vaping with our article why do I get dizzy when I vape?