Published August 26th 2022
Is e-liquid safe to be consumed in any way other than its desired way? What harm can it do? Let's look into this. 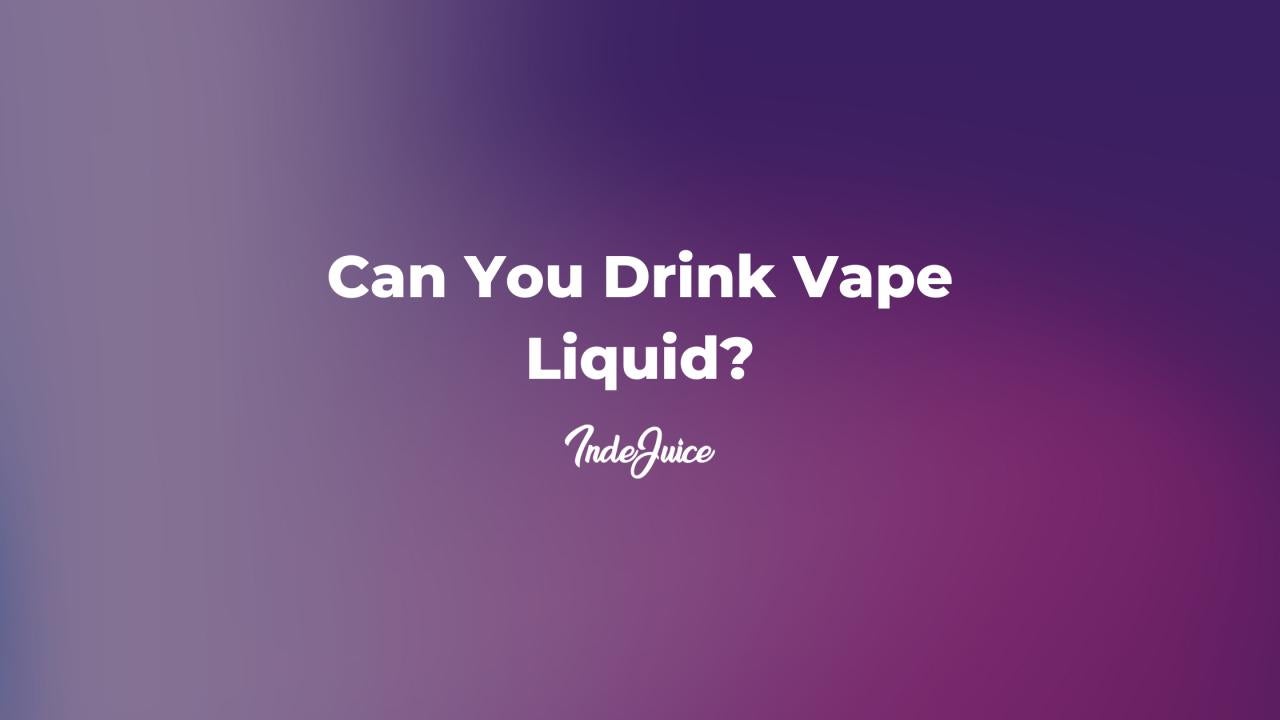 You should not drink e-liquid; getting e-liquid in your mouth may be unpleasant. However, it would help if you did not drink it. E-liquids are mostly made from ingredients that are not harmful such as PG, VG and food flavourings. However, nicotine is toxic.

Vaping liquids are mostly made up of ingredients such as propylene glycol and Vegetable Glycerine, but the most harmful when ingested is nicotine.

Nicotine is toxic in high concentrations and shouldn't be consumed. If you have been observant enough, you will note that most vape liquid bottles have a warning label regarding contact with skin and, more importantly, ingestion of the liquid. There is a good reason for this.

Consuming nicotine can certainly be dangerous at incredibly high doses, but you wouldn't actually die from consuming it in vape liquid, even a bottle full of it. Studies have shown that the lethal dose of nicotine stands at around 1000 mg, an amount that is simply not possible with commercially produced vape liquids.

However, just because it isn't lethal doesn't mean it is safe to consume. The amount of nicotine needed to be consumed in one go to feel extreme discomfort is as low as 100 mg, which can easily be met by drinking an entire bottle of e-liquid, with additional nicotine shots added. You would face some side effects of nausea, cramps, dizziness, and even convulsions.

What about accidentally consuming tiny amounts of vape liquid flavors? If small amounts are ingested, there shouldn't be an issue, and you shouldn't worry too much.

The bottom line is that deciding to drink vape liquid would be questionable and should be avoided.

Can You Put Vape Juice Under Your Tongue?

It is not recommended to put vape juice under your tongue. Most e-liquids contain nicotine, which can cause dizziness and nausea in large concentrations.

Is It Normal To Taste Your Vape Juice?

These exciting new and bold flavours might tempt you into tasting your vape liquid, but it definitely isn't a good idea to do so. Vape liquids are designed to be vaporised and inhaled, which makes tasting them regularly abnormal and an obvious thing to avoid, yet people still do so.

So why would tasting vape liquids be a bad idea if it is perfectly fine to inhale their vapour? There are many reasons for this, mainly the concentration of flavourings and nicotine in vape liquids.

Since they are meant to be vaporised in their liquid form, vape liquids have a comparatively high concentration of both nicotine and flavourings. This means that tasting vape liquids would only overpower your tastebuds but, more importantly, produce some unwanted side effects due to the nicotine content of vape liquids.

Nicotine, when consumed in high concentrations, will likely lead to you suffering from headaches and stomach cramps. Do it for long enough, and these side effects will only worsen, leading to detrimental consequences such as convulsions and chronic headaches.

Furthermore, vape liquids contain chemicals that can react with your tongue and mouth, causing irritation and sores, especially if you are sensitive or allergic to these ingredients.

Will Vape Juice Make Me Throw Up?

Throwing up because of vape juice depends on how you take it in. Vape juice, if used in the correct manner that is vaporised and inhaled, will most likely not cause you to feel nauseous or throw up.

However, you might throw up if you are directly consuming vape liquids or even come into skin contact with large amounts of vape liquids for long periods.

If not, at the very least, you will start to feel nauseous or face headaches throughout the day. This is because vape juice contains a high nicotine concentration in its liquid form.

Nicotine is known to be toxic for the human body, but it can be taken in at low concentrations with no significant side effects. However, since e-liquid vapes contain a high concentration of nicotine, consuming it or coming into contact with it for prolonged periods may lead to symptoms of nicotine poisoning, which can lead to vomiting at its worst.

Learn more about e-liquids with our articles will vape juice stain my clothes and can vape juice absorb through skin?

Will Vape Juice Stain My Clothes?

You've got some e-liquid on your clothes and are worried about it staining? Let's look into what to do next.