How Do You Know When Your Elf Bar Is Dying?

Published April 29th 2022
In this article, we give you more information on what it means when your Elf Bar flashes and how you know when you need to replace your Elf Bar. 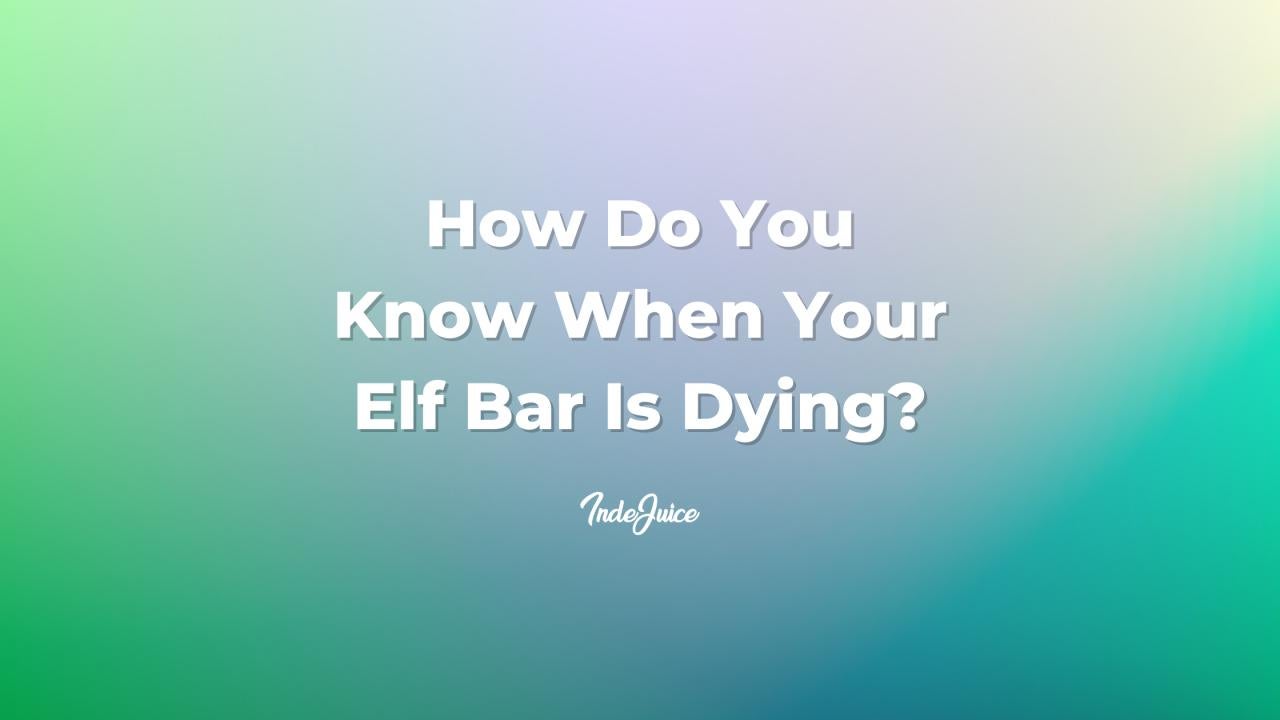 How Do You Know When Your Elf Bar Is Dying?

One sure-fire way of knowing that your Elf Bar is dying is when you notice changes to the flavour, specifically that it starts to taste burnt or seared. While there might still be some battery left on your vape, which would allow the heating element to work, there’s no more e-liquid left.

When this happens, there’s nothing for the Elf Bar heating element to vaporise. Instead, it simply continues to heat the wicking system, burning the cotton wick and bringing a burnt taste to your vape. Some signs that you are running out of e-liquid include:

Your once creamy puffs full of flavour are long gone when your vape was newly bought. Instead, you are starting to get smaller puffs which are less intense and obviously less satisfying. If this is the case, then you should replace your elf bar so that you aren’t inhaling harmful wick smoke.

While your elf bar still heats up, there is just no more smoke coming out. If your wicking system is made of cotton, you’ll likely get a burnt taste. If it’s made of metal or mesh, this could be a metallic taste instead. This is a sure sign that your elf bar is dead

If your Elf Bar battery dies, you will have to purchase a new elf bar. The battery is the essential part of your Elf bar as it gives the elf bar power to vaporise the e-liquid to allow you to vape.

Why Is My Elf Bar Blinking?

As Elf Bars are meant to be disposable, all you have to do is (responsibly) throw out your current Elf Bar and get a new one in the flavour of your choice! From strawberry to coconut, there’s a flavour for every vaper.

The Elf Bars are pre-filled with 2ml of e-liquid upon purchase. This is usually enough to last a casual vaper for about two or three days.

Though the design team planned for both versions to run out of e-liquid when the battery goes flat, there might be chances where your elf bar ends up running out of e-liquid before the battery is dead. In this case, it’s also time to get a new elf bar disposable vape.

Why Is My Elf Bar Flashing?

If your elf bar is flashing, then its battery is likely to have run out. Hence, this is a sign for you that it’s time to start hunting around for a new elf bar.

It’s highly likely that your e-liquid would also be running out soon, and you wouldn’t want to get a burnt taste when you vape anyway! With so many different flavours of Elf Bars out there in the market, there’s something new for you to try.

Learn more about disposable vapes by reading our blog where we answer the question can you refill Elf Bars?

This article looks at whether Lost Mary disposable vape devices are rechargeable and what charger they use.

What Is A Lost Mary?

In this article, we discuss what an Elf Bar Lost Mary vape is and the key features of this disposable vape.

How Can You Tell A Fake Elux Bar?

This article looks at how you can spot a fake Elux Bar disposable vape and ways to prove its authenticity.

How Long Does An Elux Vape Last?

In this article, we explore how long an Elux vape lasts including the puff count of these popular disposable vapes.