How Do You Know When Geek Bars Run Out?

Published May 5th 2022
This article discusses how you know when Geek Bars run out and how long a Geek Bar should last you. 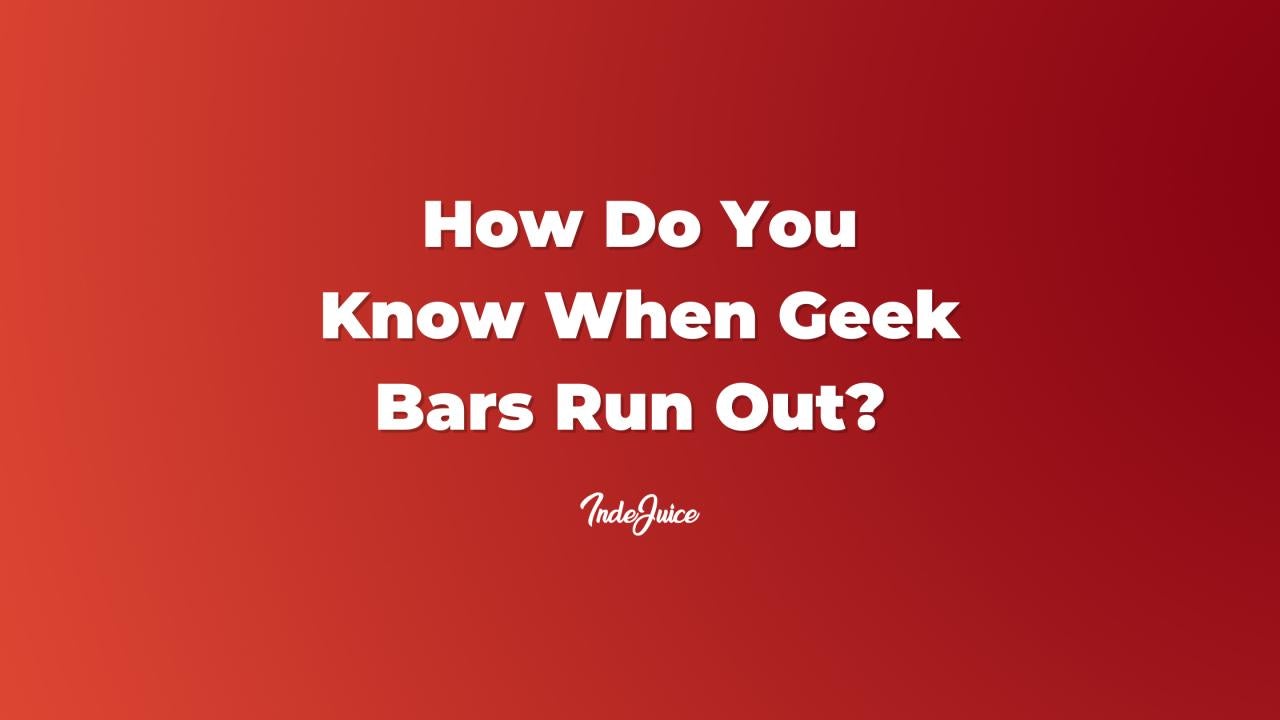 How Do You Know When Geek Bars Run Out?

When a Geek Bar runs out, you will either get a flashing light at the bottom of the device indicating that it has run out of battery or if your Geek Bar still fires but tastes burnt, this means the liquid has run out.

When it comes to disposable vapes, it’s hard to tell when the device is drawing to its end. But for Geek Bars, it’s pretty easy — once you cannot puff anything out, the Geek Bar is empty. Unlike other vape pods, however, even your final hit will not taste burnt and will be as tasty and satisfying as your first ever draw from that Geek Bar.

How Many Days Do Geek Bars Last?

Depending on how much you vape, the average life of a Geek Bar is around 1-3 days.

Some may ask, how many days can a Geek Bar even last? The answer is that it depends! Each Geek Bar provides at least 575 puffs, and we can tell you that it’s a whopping 90% more than other disposable vape brands on the market. How many days these 575 puffs can last you truly depends on your vaping habit. The more frequent you vape, the fewer days our Geek Bar will last.

How Long Will A Geek Bar Last?

Depending on how much the Geek Bar is used, the average Geek Bar lasts for around 500-600 puffs.

How long a Geek Bar can last is entirely up to the user. If they are a frequent vaper that takes out their vape kit every few hours, and if they have long vaping sessions, our Geek Bar will probably tide them through plenty of enjoyable vaping sessions over a shorter period of time. However, compared to other vape brands, each Geek Bar can last 90% longer, giving about 575 puffs to each user. This means that our Geek Bars can probably last frequent vapers a longer time than other available vape kits out there.

How Long Should Geek Bars Last?

On average a Geek Bar lasts up to 500/600 puffs which should last around 1-3 days depending on the usage.

Every individual Geek Bar is made to last up to 575 puffs as it comes with a huge 550 mAh battery. This number of puffs translates to roughly 48 cigarettes, making each Geek Bar a worthy investment as they can last any vaper a very long time.

How Many Days Does A Geek Bar Last?

A Geek Bar will last up to 575 puffs which should last the user between 1-3 days, depending on the usage.

How many days a Geek Bar can last depends on its use. Frequent vapers will find their e-liquids depleting at a faster rate. The number of days that a Geek Bar can last depends on how strongly vapers make their every draw. Regular puffs will translate to roughly equal to the estimated puff count of 575 puffs. Larger, longer puffs, however, will translate into your Geek Bar running out of liquid much faster, shortening the life span of your Geek Bar.

How Long Should A Geek Bar Last You In Days?

A Geek Bar should last between 1-3 days, depending on how much the Geek Bar is used.

Much like how 10 pounds can last a poor man two weeks and how the same 10 pounds would tide a rich man over for barely half the price of their lunch, the duration that a Geek Bar can last entirely depends on the level of usage that vapers experience. While the question of ‘how long should a Geek Bar last in days?’ might not be directly answerable, a good guideline is that a Geek Bar should last about 1-2 days for most vapers, excluding those who really take huge puffs — which will deplete their Geek Bar e-liquids inevitably.

Elf Bars last longer than Geek Bars as Elf Bar has a 600 puff count and the Geek Bar has 575 puffs.

Elf bars are another huge contender in the disposable vape market, and they are designed to be light and pocket-friendly, making them a serious competitor for the Geek Bar. We now ask: do Elf or Geek Bars last longer?

One way to answer this question is to look at their respective puff counts, which is the total number of puffs vapers can draw from their vape kit before its contents are depleted. Geek bars give approximately 575 puffs, while Elf Bars give a slightly higher number of puffs at 600. Theoretically speaking, the Elf Bar should last longer, but the minute difference of just 25 puffs means that there isn’t any huge difference in the duration these vape kits can last.

Elf Bars also come with a 550mAh battery, slightly bigger than a Geek Bar. However, this minuscule difference would only make the Elf Bar last somewhat longer in terms of its battery life. Elf bars and Geek Bars are thus almost on the same level in terms of longevity, measured in puff counts and battery lives.

What would probably make a bigger difference in affecting their longevity is perhaps the way that each vaper uses each vape kit. If you’re one for long, deep draws in vaping, your disposable vape device will last far shorter than the average vaper who takes quick puffs.

Read our articles on how many hits are in a Geek Bar and can you get nicotine free Geek Bar for more insights into disposable vapes.