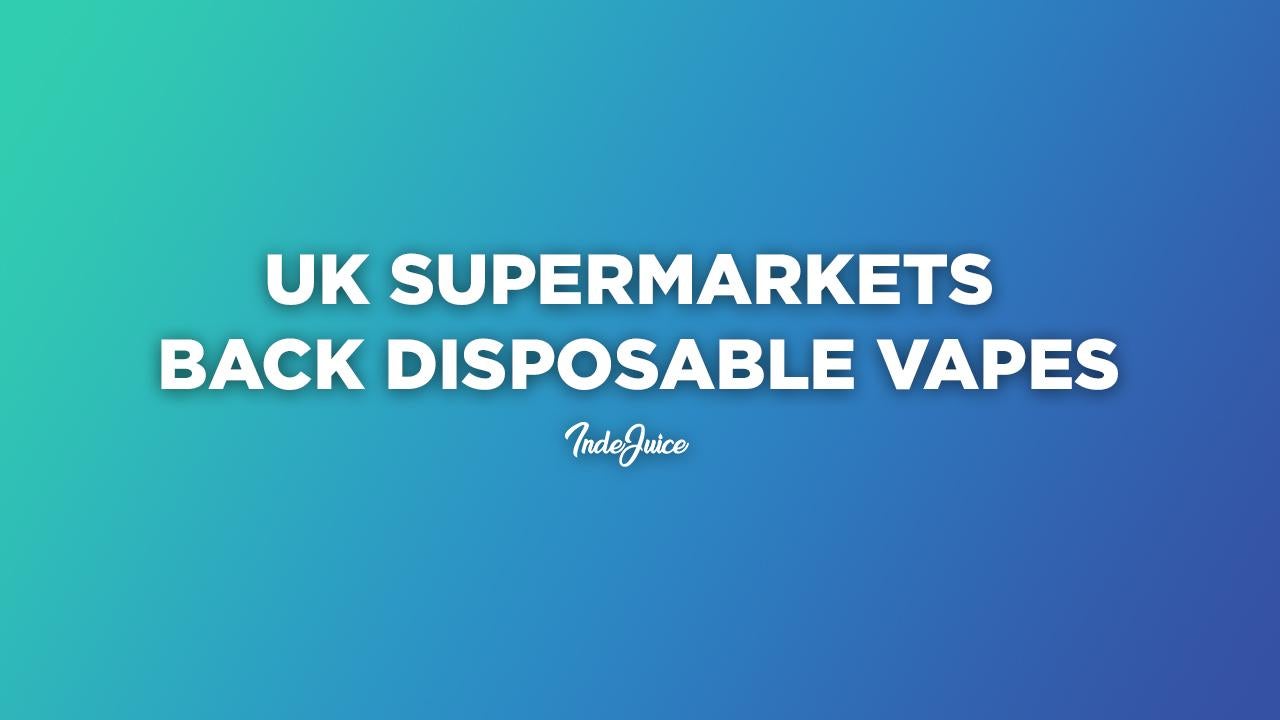 The UK vaping Industry is booming, with more than 3 million people using a vape in the last 12 months and as high as 1.5 million vapers being ex-smokers. The good news has just got better, with the leading UK supermarkets back on board with disposable e-cigarettes to help smokers make the switch from tobacco products to vaping.

Shoppers will be able to buy disposables at Tesco, Morrisons, Asda and Sainsbury's, making it easier for people to purchase disposable vapes without having to go out of their way.

The move comes after demand for vaping products increased in recent years due to the fall in the price of vaporisers and the increasing number of high-quality e-liquids on the market.

Experts believe that there is a good chance that UK smokers could be better protected against harm from second-hand smoke, with vaporisers being a better alternative. Also, the move is likely to improve public health due to fewer people smoking traditional cigarettes, which is the number one cause of death in the UK.

With vaping devices becoming so popular across the UK and vapers purchasing their products from the high street, there has been an increase in the take up of vaping from smokers.

One vape shop owner from Kent echoed these stories:

"Since we have opened our doors, we have seen many people who are smokers come in and ask about vaping products. We have helped people to make the switch from tobacco to e-cigarettes with a lot of success."

The most recent vaping evidence update from the UK Government explains that: "Alternative nicotine delivery devices, such as nicotine vaping products, could play a crucial role in reducing the enormous health burden caused by cigarette smoking".

The new government report on vaping shows that it is a much more effective smoking cessation tool than previously assumed. Compared to last year's review, there are more substantial pieces of evidence in this years study showing just how helpful nicotine vapes can be for those trying to quit or cut back their intake.

Shoppers can purchase a disposable e-cigarette from most supermarkets for as little as £3, with many brands on offer. This makes vaping much more affordable than before when you could only purchase a starter kit which includes a mod and an e-liquid, for a higher price.

The disposable e-cigarettes are different from the more expensive rechargeable versions, as they do not have to be plugged into a mains socket to charge them and can be used until the e-liquid inside runs dry. There are many different flavours of liquid on offer, ranging from tobacco and menthol to fruits and desserts.

Many supermarkets have already reported an increase in sales of e-cigarettes, with one Tesco customer explaining that he had gone the disposable route to alleviate any fears over health issues.

"At first, I wanted to invest in a more expensive version, but then I decided it would be best if I just bought something simple which wouldn't break. Nowadays, you can find vape stores on almost every high street, so I'm sure people will be able to pick up a disposable or reusable if they want."

Different supermarkets stock different brands of disposable e-cigarettes. For a complete list of e-liquid flavours on offer at each supermarket, visit their online store.

Want to learn about the history of electronic cigarettes? Check out our re-cap of when vapes were invented and how e-cigs have developed over time.