What Happens If You Vape On Airplane?

Published June 8th 2022
In this article, we discuss what can happen if you vape on a plane and the associated repercussions, fines and penalties. 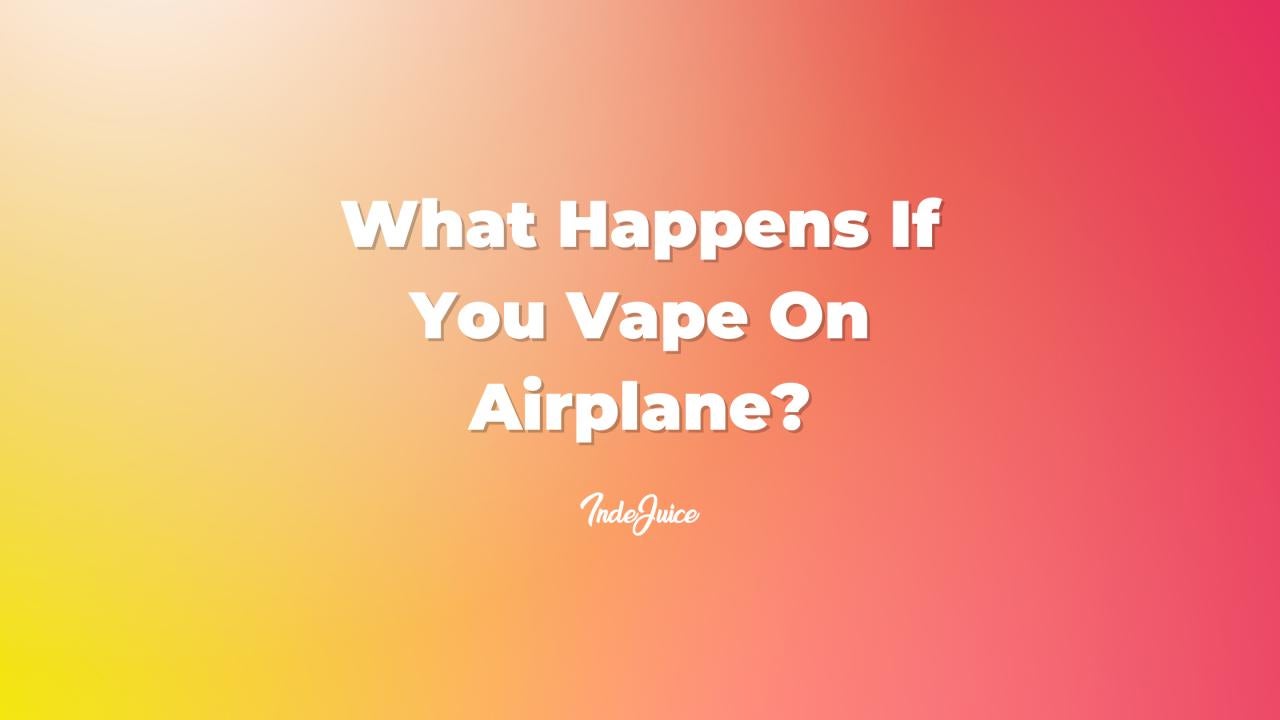 What Happens If You Vape On Airplane?

Vaping on a plane can result in a considerable fine and further potential issues when you land at your destination.

Despite their increasing prevalence, using electronic cigarettes and disposable vapes is not permitted on planes as the lithium batteries in the vape might pose a danger to you and other passengers. You should not be bringing your vape with your checked luggage. Almost every airline had its independent policy barring it, which was then supported by government regulations enabling airlines to implement separate guidelines that don't clash with the law. Now, violations of federal aircraft laws result in extremely harsh penalties.

A user can be jailed and penalised vast amounts of money for just smoking a vape or other electronic devices, just as they would with traditional cigarettes. You might face significant legal repercussions, including incarceration, if an aircraft is rerouted and forced to land due to your conduct ⁠— which could transpire if clouds of vapour began spewing out of the restroom.

The penalty for vaping and smoking on a plane can vary from two thousand to four thousand, although it is not a criminal violation all on its own. If you were found to have interfered with a smoke alarm or disobeyed a crew personnel member's directive to stop vaping, the situation could swiftly intensify. While a passenger may be detained and escorted off a flight for vaping, if you are lucky, a simple fine will typically be issued instead unless there is more to the event.

Conversely, dependent on the country you are travelling to, a person may be arrested and detained upon landing on some international flights, as some countries prohibit e-cigarettes. Often, the regulations of the skies are not stringently enforced, which means that flight crews may issue warnings to passengers who participate in non-dangerous but illegal behaviour.

However, a single, little incident of insubordination such as continuing to vape in the restroom despite warnings, can sometimes be enough to cause a plane to be diverted. Only around 10% of the fines imposed are for in-flight smoking infractions.

Why Are Vapes Not Allowed On Planes?

It’s not that vapes are not allowed on a plane but that you can’t use them on a plane. Electronic smoking devices can be taken on an aircraft in your carry-on luggage!

Airport authorities mandate that you stow them in your carry-on baggage rather than your check-in suitcase. Due to their lithium batteries, vapes are at the risk of bursting into flames and thus, you are not permitted to carry your vaporiser in check-in luggage. This rule applies to all electronic cigarettes, vape pens, and similar devices.

Moreover, they also pose a risk due to existing regulations about liquids on board. Because vaping juice is a liquid, it must be handled with the same care as other liquids. This implies that as far as the bottle is 100 millilitres or less and slots in your 1-litre transparent sealable liquids transparent bag, you can bring vape juice in your carry-on. Checked baggage is required for larger volumes if you're looking to carry more.

Other suggestions include the following. While aboard the plane, you are not permitted to charge it. To ensure full assurance, you could even detach the battery to prevent it from going on by accident. Before even heading to the airport, please visit the carrier's site to learn about their vaping policies before travelling. The airline's restrictions might be more stringent than the national regulations.

If you're travelling overseas, learn about the nation's specific rules and regulations. Electronic smoking devices are not regarded equally worldwide, and you don't want your pricey vape device to be impounded, or even worse, to land you in legal jeopardy.

Can I Vape In An Airport Bathroom?

No, you cannot vape in an airport bathroom.

Most airlines adhere to international regulations that ban vape pens. There will be repercussions if you are caught vaping in the airport bathroom or onboard the flight.

If you are unsure, do check local legislation ahead of time to determine if vaping is permitted at the airport from the area of departure and landing. The check-in procedure is pretty thorough, so e-cigarette users should abstain from taking a hit. Vapers should take a few minutes to get ahead of the rules and regulations to avoid getting in trouble. In most situations, finding or not whether vaping is permitted in an airport takes a few clicks. At the airport, you can inquire about whether or not vaping is prohibited. Breaking the law for a few minutes of pleasure is not worth it.

Can You Secretly Vape On A Plane?

It is illegal to try a vape on a plane, which can have serious repercussions.

Vaping electronic cigarettes are treated the same as smoking traditional cigarettes. It is illegal to vape on a plane, even though some vapers may continue to do so.

If you're found to vape secretly on a plane, you can face serious repercussions when you land and be fined.

Learn more about travelling with a vape with our article does vaping set smoke alarms?