Published April 12th 2020
In the United Kingdom and throughout Europe, the maximum concentration of nicotine that is permitted to be sold to the general public is 20mg. That means that 12mg is just over half of the maximum strength of nicotine permissible. 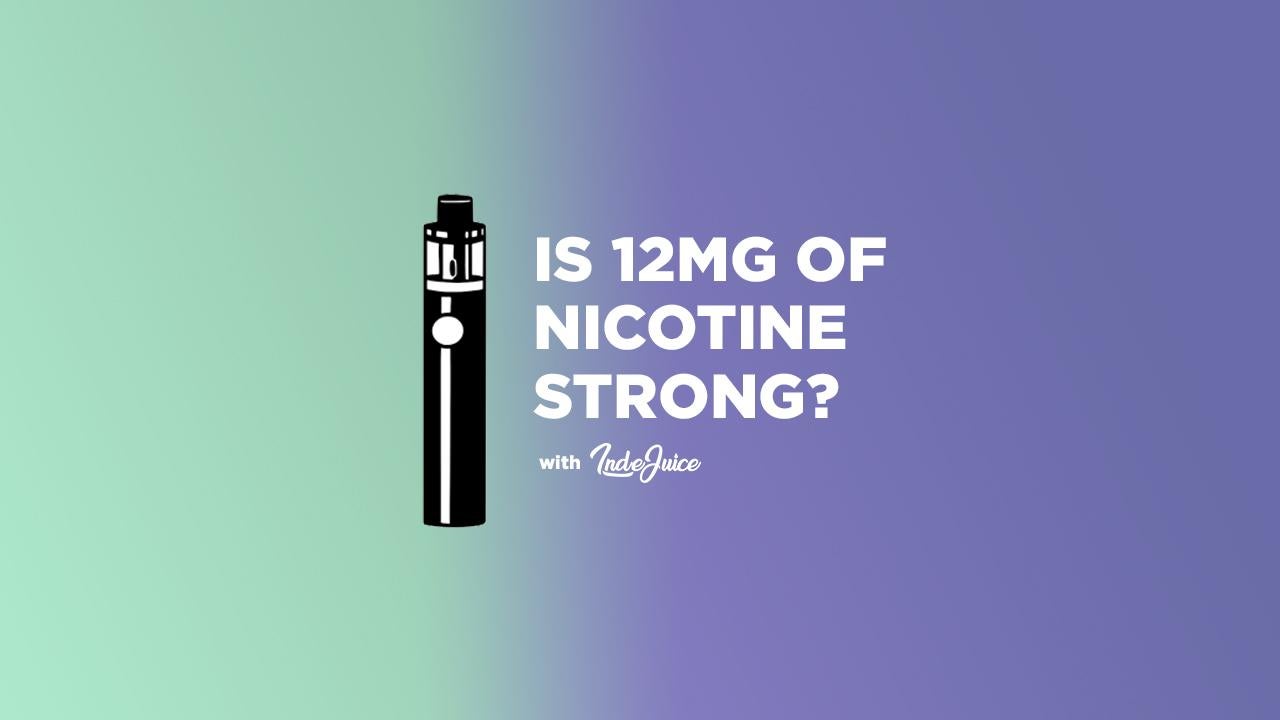 In the United Kingdom and throughout Europe, the maximum concentration of nicotine that is permitted to be sold to the general public is 20mg. That means that 12mg is just over half of the maximum strength of nicotine permissible.

How much nicotine in a cigarette?

With the average cigarette containing approximately 10-12mg of nicotine, a lot of which is burnt along with another 3,000+ chemicals, 12mg is generally enough nicotine in vape juice to being the process of switching over from smoking for a moderate consumer of cigarettes. For a more accurate calculation of liquid nicotine vs number of cigarettes smoked, check out our Cig to Nic Calculator.

On the other hand, those who smoke one pack or more of cigarettes a day, it is likely that you will require the maximum 20mg of nicotine in order to increase the likelihood of a successful nicotine replacement therapy.

How much liquid is 12mg nicotine?

When purchasing 12mg of nicotine, you will notice that your choices are limited to 10ml bottles. This is because the normal short fills that are manufactured at 0mg 50ml in a 60ml bottle (allowing a 10ml 18mg nicotine shot to take the overall mixture up to 60ml at 3mg) are not capable of creating a mixture above 3mg due to the maximum restriction of nicotine also applying to unflavoured nicotine shots.

All 12mg vape juices that are sold in the UK and Europe must adhere to the Tobacco Products Directive. This means that they undergo a series of tests that, if passed, will then allow them to go on sale to the general public.

As these compliance tests can be expensive, particularly if one flavour is being tested in multiple nicotine strengths, the price of 12mg 10ml bottles tends to be slightly higher than the equivalent ml in a large 50ml or 100ml bottle.

Other than choosing your favourite flavour, another choice that you will face when shopping for 12mg nicotine is whether you would like that particular juice in standard freebase nicotine (known as Regular 10mls) or if you would prefer a Nicotine Salt format.

When faced with the question of whether to choose the Regular 10ml version of a flavour or the Nicotine Salt version, the main questions to ask yourself is whether you enjoy a stronger throat hit versus a smoother throat hit and just how high in nicotine concentration you would like to go. Even at the highest 20mg, nicotine salts have a tendency to feel like half the amount of nicotine due to the effect of the nicotine salt compound. Therefore, if you determine that 12mg is the perfect strength for you but the throat hit is too harsh, it would be recommended to stay at the chosen 12mg but switch to a nicotine salt format which will make the experience a lot less intrusive.

What Is The Strongest Vape Juice?

Ever wondered what is the strongest vape juice? In this article we take a closer look at nicotine strengths and what you can expect with your e-liquid of choice.

Want a vape flavour that tastes just like tobacco? In this article, we take a closer look at vape flavours to help narrow down your tobacco flavour choices.