Published January 21st 2021
In this guide, we will cover the difference between cloud chasing and flavour chasing to help you make more informed decisions. 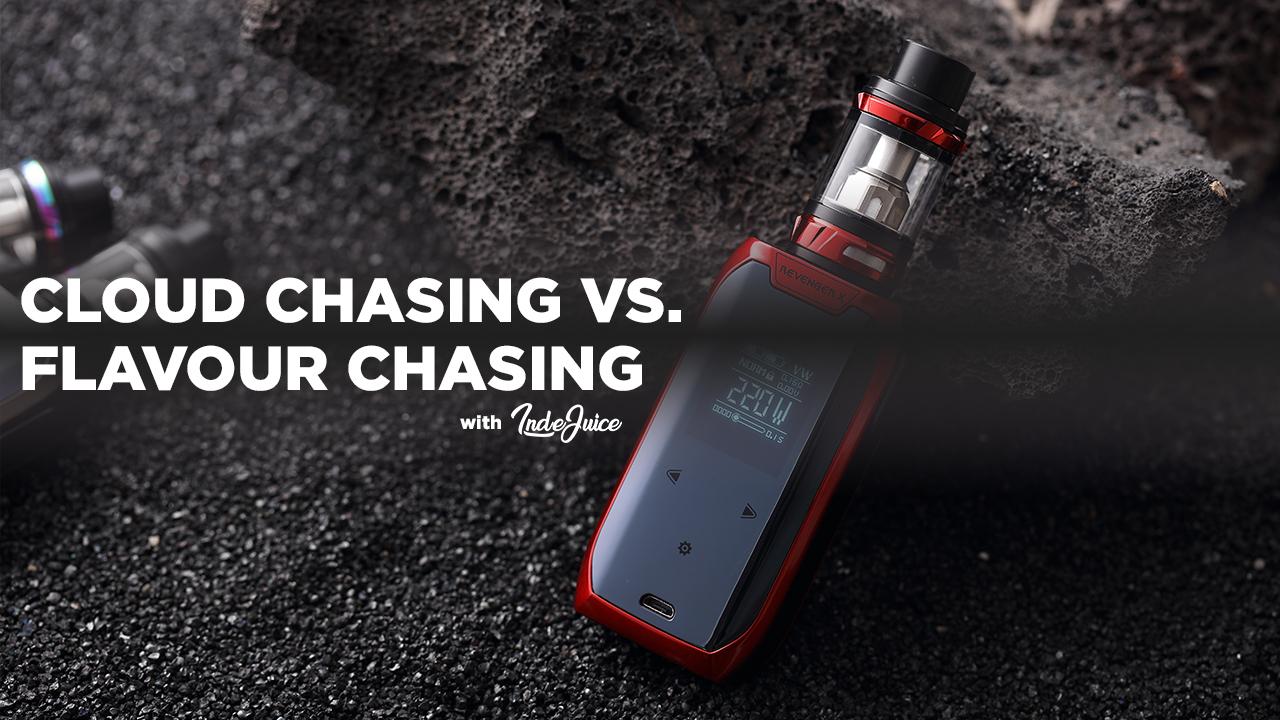 Flavour chasers and cloud chasers differ in both the equipment they use and their juice of choice. The main difference is that flavour chasers are primarily concerned with the flavour satisfaction from the juice, whereas, cloud chasers are concerned with producing the largest cloud imaginable - with flavour coming as somewhat of a secondary priority. Neither group of people outweigh the other and as there is generally an even split across the board, we cater for both at our vape juice shop.

To understand the difference between flavour and cloud chasing, we must firstly understand the components of your refills. E-liquids in general consist of the following three or four ingredients, depending on whether you vape regular 10mls, nic salts or shortfills. These are vegetable glycerin (VG), Propylene Glycol (PG), nicotine (specific to regular 10mls or nic salts) and food flavourings. 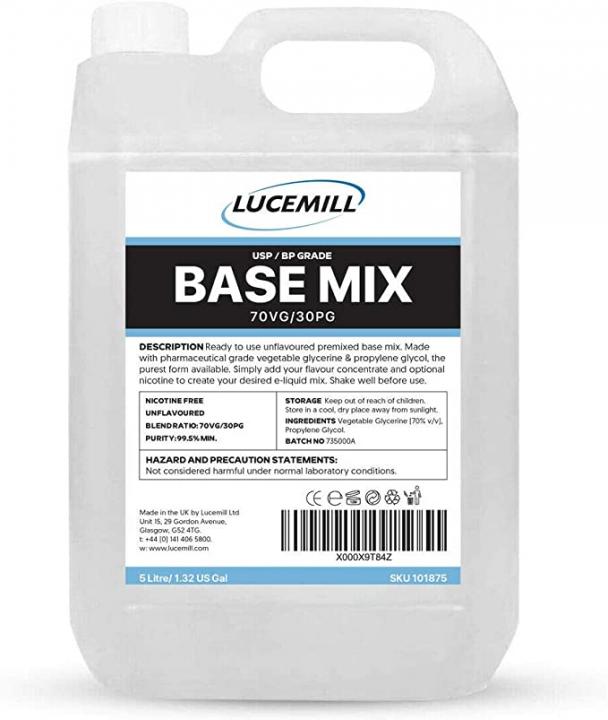 Vegetable Glycerin is the primary ingredient concerned with vapour production. This is why cloud chasers will tend to be vaping a higher proportion of VG. Whether it's cloud chasing competitions, professional vapers or competitive vapers the goal is the same. This goal is to create large clouds generally produced by box mods and sub ohm tanks whilst keeping battery safety at the forefront.

VG is typically made from soybean, coconut or palm oil and stored in a cool dark atmosphere. It also tends to be odourless, mild and sweet to the taste buds, making it an ideal ingredient for e-liquid. When looking at pure pharmaceutical grade VG, it is a highly viscous substance, and as such requires a more powerful device to vapourise the e-liquid (we will be discussing the differences in devices later in this blog). VG also naturally has more of a throat hit than PG.

Similarly to VG, Propylene Glycol is also colourless, viscous, nearly odourless and possesses a slightly sweet taste. Unline VG, which is produced from plants, PG is primarily produced from the production of propylene oxide. The food-grade flavourings which are used in e-liquids, tend to bind better to PG as opposed to VG and as such, is better suited for flavour chasing and hitting the sweet spot with improved flavour. PG also helps reduce vaper s tongue as the flavouring is more intense. Check out our list of flavours to find out more.

When looking at the ratios of VG/PG within e-liquids, cloud chasers will tend to vape shortfills (nicotine not included and has more a higher volume than 10ml). Most shortfills will have a ratio of 70/30. As mentioned previously, this is optimised for cloud chasing due to the higher proportion of VG, which produces more vapour than PG when vaped at the expense of flavour. Temperature control devices are also common to avoid dry hits.

When a vaper is primarily concerned with flavour chasing as opposed to cloud chasing, they will tend to use either regular 10mls or nicotine salts (contains nicotine and cannot be larger than 10ml in size). These types of juice tend to be usually 60/40 or 50/50 split, this is optimised for flavour chasing, because there is more PG for the food flavourings to bind to, at the expense of vapour production.

Due to the various ratios of VG/PG, vaping the wrong e-liquid in the wrong device could result in a burnt flavour (and coil), or spit back (small particles of juice, which were not entirely vapourised in the mouth).

How do devices impact flavours and clouds?

When switching over from smoking to vaping, most people will use a pod system (such as the UWELL Caliburn, Vaporesso XROS or Smok Nord), or a low powered device to begin with (Aspire PockeX or Innokin Coolfire Z50). With pod systems, a vaper is generally unable to change the wattage of the device. You must also replace & buy a new pod or coil when it has reached the end of its life. Due to the limited power of these devices, these are best suited for vaping nicotine salts or regular 10mls, due to the higher proportion of PG within e-liquids. 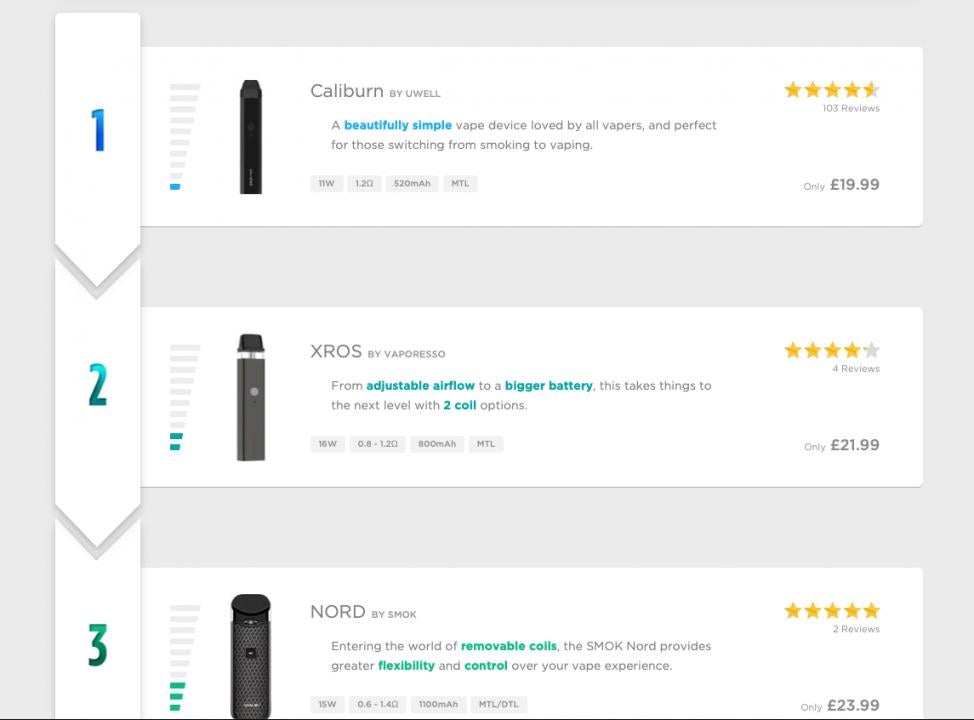 In essence, a low powered vape device is better suited to juices with a higher proportion of PG when compared to VG. Check out our vape kits section to explore devices.

More experienced vapers and cloud chasers, have often been vaping for a very long time and are well versed in devices and which e-liquids to use. Medium to higher powered devices such as the Voopoo DragX, Geekvape Aegis Solo and the Freemax Maxus, are all powerful devices which are not to be taken lightly. These devices tend to range in max wattage power from 80 - 200W, which are much more powerful than pod systems, or low powered devices. As such, these devices are capable of vaporising the higher proportions VG within e-liquids.

In essence, a medium to high powered device is better suited to vape an e-liquid with a higher proportion of VG when compared to VG.

Extreme vapers (i.e. true cloud chasers) often take vaping to the extreme. These group of vapers, (which are not many), tend to use extremely powerful, unfettered and unregulated vape devices. We do not recommend using these devices. The T storm is able to reach a wattage of 230W, which is extremely powerful, however it is capable of vapourising the most viscous e-liquids and as such is ideal for cloud chasing. Unregulated mods, such as mech mods have no cap to the power they produce and as such, these are the perfect device for true cloud chasing. The thick and large fog clouds you see when a vaper exhales, tend to be produced with these extremely powerful devices.

To conclude, there are primarily two types of vapers, cloud chasers and flavour chasers. Both are after two very different experiences when it comes to vaping. Flavour chasers, will tend to use a lower powered device such as a pod system, or an entry level vape device which is capable of vapourising 50/50 or 60/40 VG/PG ratio. These types of juices are usually regular 10mls, or nicotine salts, however, some shortfills are available in these ratios. The higher proportions of PG when compared to 70/30, allow more food-grade flavourings to bind to the PG, and as such the term, flavour chaser was born.