What Happens When You Quit Smoking And Start Vaping

Published April 2nd 2019
Record numbers of smokers have quit by using e-cigarettes, also known as vapes, yet millions of smokers remain with many questions about smoking vs vaping. What are the big differences between smoking and vaping? Just how easy is it to quit by vaping? And are there any long-term effects? 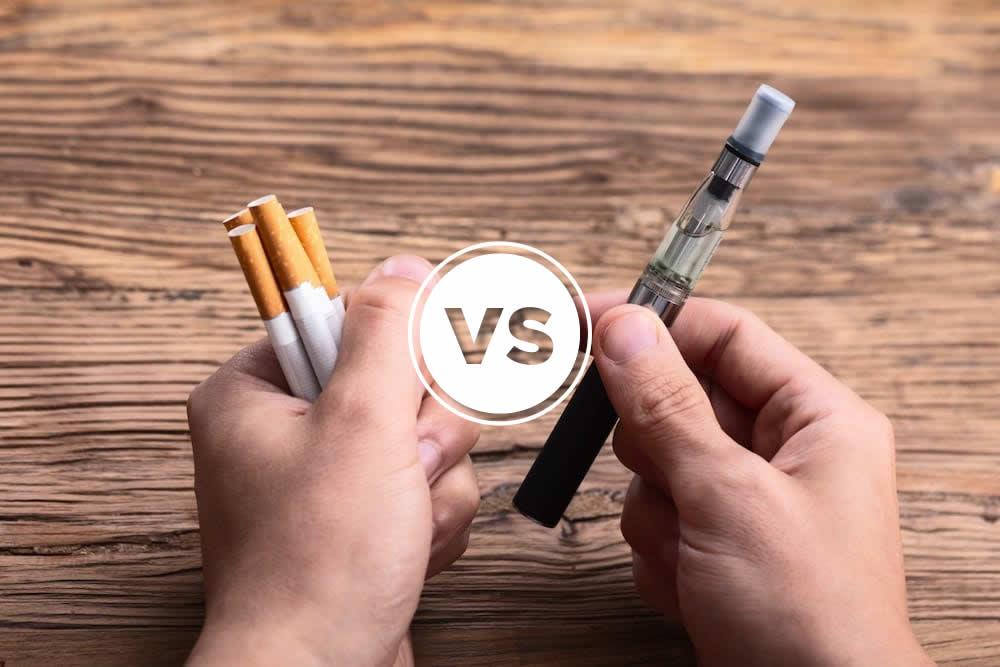 Last year, in the summer of 2018, I came across a new type of technology that took me by surprise. In front me lay a device that was supposedly being used all around me, yet somehow remained invisible to me. What was it? An ‘e-Cigarette’, or more commonly known as a ‘Vape’.

I didn’t really know what to think of it at first. I suppose it made sense, technology was changing many industries after all. Computers changed how we work, smartphones reinvented how we communicate, and apps have even changed how we travel and buy food. So it made sense that it’d redefine smoking too.

And then it hit me, I had come across vaping before, many many years ago. I was lucky enough to be at an exclusive Google event down in London, during which I’d bumped into an old friend. We got carried away talking about the latest and greatest tech, and during this convo he asked if we could head outside so he could smoke. I didn’t mind, so we made our way out into the fancy courtyard.

As we continued talking, he naturally reached into his pocket to grab his cigarettes, except he pulled out a pen. I didn’t think much of it at first, until he raised it to his mouth and began to inhale.

I was so confused.

I stared on as he continued to inhale, and as he lowered this ‘pen’, he exhaled smoke. Being the techie I am, I instantly asked what on earth he had in his hand. It turned out he had bought a ‘Vaporizer’ from China, a sort of ‘electronic cigarette’ he called it, but instead of your usual cigarette, you could refill it with ‘Vape Juice’.

I didn’t realise it back then, but he had actually quit smoking without realising it. He just saw it as a ‘better’ cigarette, when in actual fact it wasn’t a cigarette at all.

So what’s the difference between Smoking and Vaping?

The difference between smoking vs vaping? More than you’d think.

Vape juice is comprised of completely different ingredients as nothing needs to be ‘burnt’, simply turned to vapour, like water to steam. The common ingredients are Propylene Glycol, Vegetable Glycerin, Acetaldehyde and Nitrosamines. The only uncertainty with these are the fact they are all food-grade and therefore safe to consume. However, that means it’s safe to be ingested, not vaporized and inhaled into your lungs. Whether this is harmful seems to always be the big question, but that should only be an important question for non-smokers. Why? Because compared to the ingredients in cigarettes, these are significantly safer. 95% less harmful than cigarettes to be exact according to Cancer Research and the NHS.

‘Vape Juices’ come in a huge variety of flavours; apple, mint, mango, bubblegum, twister ice-cream… the list is endless. You can even pick out your favourite cereals or desserts! That doesn’t just mean the eradication of a smell disliked by people around you, but it makes inhaling your nicotine hit extremely pleasant.

Ultimately, the biggest difference is the one written on all cigarettes: “Smoking Kills”. But is the same warning on vaping products? No. The only stated warning associated with vaping is the risk of addiction due to the nicotine. It is also worth considering that this could be argued to only be a risk to non-smokers, as smokers are already addicted to nicotine.

Oh, one other difference is that vaping is much cheaper, but by how much depends on how much you currently smoke.

How does that make it easy to quit Smoking?

Like a cigarette, vaping also gives you the nicotine hit that you crave. But it’s nothing like nicotine patches or nicotine gum. Why? Because nicotine may not be the only addiction you have as a smoker. The other is the habit of holding something from which you inhale and exhale smoke, which is where vaping has a big advantage as a method of quitting. You still hold an item from which you inhale and exhale, so you can still puff away, but obviously this time in a much less harmful manner.

Sound amazing, but are there any long-term effects?

Vaping has been around for approximately 10 years, and since then Cancer Research and NHS have published the statistic that “Vaping is 95% less harmful than Smoking”. But what is that remaining 5%? Unfortunately that quite simply 5% that they’re unsure of. As the industry is only 10 years old it is simply too soon to say whether vaping has any negative long-terms effects.

What does that mean? Well, if you don’t smoke, you should not vape.

However, if you smoke, it’s recommended by NHS, Cancer Research and IndeJuice that you switch to vaping, as there is definitely one thing for certain: Vaping is significantly less harmful than Smoking.