Should I Vape Before Bed?

Published May 16th 2022
In this article, we discuss whether you should vape before bed and how vaping affects your sleep routine. 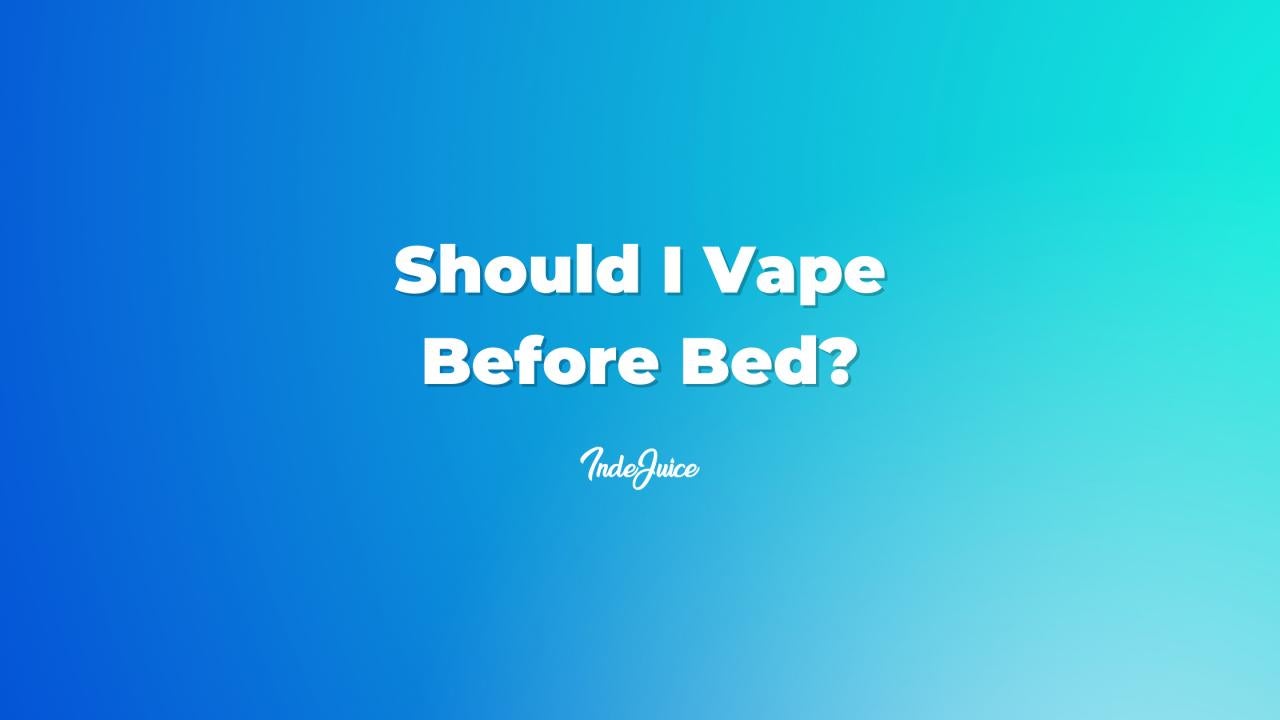 Should I Vape Before Bed?

No is the short answer. Vaping before going to sleep or before bed is not a good idea or something that should not be practised for several reasons. This is because nicotine is a stimulant and will cause the user to feel more alert just before bed when the body is trying to unwind and fall asleep.

It is a well-known fact that nicotine is a stimulant, much like caffeine. The effects of nicotine on the body have been well established throughout the decades as increasing blood pressure and raising the heart rate, which causes the user to feel more awake and alert. That's why we at the IndeJuice ecig store do not recommend vaping before bedtime.

Medical research has been undertaken looking at the links between nicotine and sleep. It has shown that nicotine does indeed impact sleep health in numerous ways. Firstly, nicotine suppresses REM sleep (Rapid Eye Movement); REM sleep is the deepest level of sleep and the last stage in the sleep cycle. Scientific research has indicated that many nicotine users feel less well-rested than non-nicotine users because they spend more time in the earlier stages of sleep, which are known to be less restful than stage 3 (deep sleep) and stage 4 - REM sleep.

Secondly, due to the stimulation factor of nicotine, reports have shown nicotine users tend to wake more often at night time. This causes nicotine users (whether smokers or vapers) to have more disturbed sleep, which does not allow the person to go through all the sleep cycles and wake feel rested. Furthermore, nicotine withdrawal symptoms throughout the night can disrupt the body's natural circadian rhythms causing the nicotine user to wake more often.

It is known that smokers (possibly vapers too) tend to experience more sleep apnea (where breathing stops and starts during) and can be debilitating or even fatal in some circumstances. The inhalation of smoke or vapour can narrow the lungs' bronchial passages, which may, in turn, aggravate nighttime breathing. Should someone suffer from sleep apnea, inhaling smoke or vapour can be the worst thing that person does.

Yes - vaping does affect sleep. The relationship between nicotine use and sleep has been well researched and documented throughout the scientific literature.

Sleep scientists have established that there are 4 stages of sleep which make up one cycle, with each stage lasting between 5 minutes up to 1 hour. The first 3 stages are Non REM (Rapid Eye Movement sleep), and the last stage (stage 4) is REM sleep. A typical person needs between 4-5 cycles per night.

It is a well-established fact that nicotine is a stimulating chemical that causes the nicotine user to feel more alert and awake. These are not beneficial to a person who is preparing to sleep. A person trying to sleep should be trying to calm the mind and body using other substances such as chamomile tea or infusers rather than stimulating both the body and mind with nicotine.

Nicotine reduces the amount of time a nicotine user spends in stage 3 and stage 4 REM sleep. Stage 3 sleep is necessary is a deep sleep that scientists believe is imperative for restorative sleep allowing for body recovery/growth, boosting the immune system and other essential body functions. Rapid Eye Movement sleep is the last stage of sleep necessary for cognitive functions such as learning, creativity and memory.

Read more with our article on how does vaping feel like?