Published June 14th 2022
In this article, we discuss what vapes are most similar to cigarettes and how many puffs in a disposable compare to a cigarette. 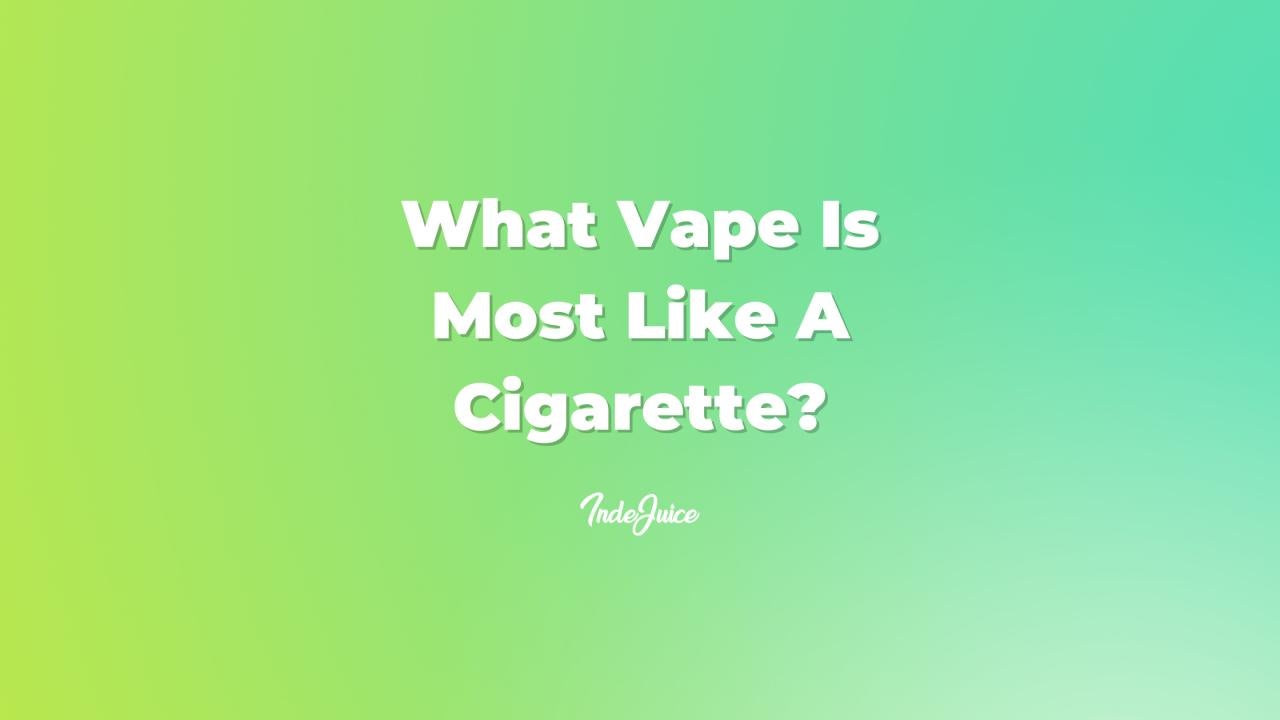 Disposable vapes such as the Elf Bar T600, Uwell Caliburn pod system and Cig-a-likes mimic the cigarette smoking cessation the most.

In the way disposable vapes are engineered, they are meant to provide the best cigarette-like response to the vaper's mouth, fingers, and nicotine dosage. They are an attractive option for cigarette smokers to transition to vaping for health benefits.

The Elf Bar T600 is an excellent device for ex-smokers. The cigarette tip at the end of the disposable mimics the same filter used in conventional cigarettes. The Elf Bar T600 provides an instant nicotine hit and is available in many flavours.

Pod system devices such as the Uwell Caliburn contain disposable pods meant to be refilled. Pod systems,s in the long run, work out cheaper, and it gives the vaper the option of a wide selection of e-liquids to choose from. Nicotine salts and regular 10mls come in strengths up to 20mg, which is the legal limit, and enough nicotine to satisfy the vaper.

If we are talking about more of the exterior appearance, some vapes look extraordinarily like cigarettes. These are usually referred to as “cig-a-likes”.

Cig-a-likes usually come with a charger, a carrying pouch, and a long cylindrical exterior. Some cig-a-likes have a paper feeling on the exterior to ease long-time smokers into the physical feeling of vaping a cig-a-like. However, you may not experience a satisfying nicotine hit, and there aren't as many flavours to choose from.

How Many Puffs A Day Vape?

When analysed by a study, researchers found that over 100 days and across 185 users, the average user puffed 132 puffs a day, which on average is 10 cigarettes.

This value is instrumental in calculating how long your e-liquid will last since sometimes pods market their products based on how many puffs it is said to last.

This number, however, comes with some essential caveats. When taking other averages, you could come up with a number as much as 163, and the number of puffs per day tends to vary significantly. For example, it was found that puffs decreased by close to 5% during the weekend, whereas during the workweek, the puffs steadily increased, with most puffs happening between 10 am to 10 pm.

Is There A Vape That Looks Like A Cigarette?

Yes! These vapes are known as “cig-a-likes”.

The best cig-a-likes are designed for mouth-to-lung vaping or MTL vaping. This style of vaping uses either balanced PG/VG e-liquids or PG-heavy liquids and can sometimes even be replaced with a nic salt e-liquid. Cig-a-likes are usually either disposable or engineered to be compact while remaining refillable and rechargeable.

Cig-a-likes may come in a product kit with nicotine-contained e-liquids, a charger, and a carrying pouch, and many cig-a-likes have a long cylindrical appearance, with some even recreating a paper-like quality on the exterior so that long-time smokers will be familiar with the sensation and the physical feeling.

Some cig-a-likes come in a case similar to a cigarette packet. These are sometimes also the charging cases for your vape, so while it is an excellent replica of the original, it provides the same sort of functionality your Bluetooth earpiece cases would have.

Many cig-a-likes are meant to be stealthy and don’t produce a large amount of vapour to make vaping in discrete situations more possible.

This usually means that cig-a-likes have a low tank capacity and a lower-than-average battery capacity. When cig-a-likes are sold, their main purpose is usually that it barely takes up any space, and for those looking to hit their vape a few times in a workday, it fits the bill. Another great thing about cig-a-likes is that they are usually straightforward to find and cheap to produce since they’re not as feature-rich or modular as their tank pod variants.

If you want a vape that functions similar to a cigarette but doesn’t quite look like one, you can also try Elf Bar disposable vapes with many of the same upsides as a cig-a-like, but a more modern and somehow, an even smaller form factor.

How Many Puffs Of Vape Is Equal To A Cigarette?

12.5 puffs from a vape pen is equal to one cigarette.

Depending on your nicotine concentration and which cigarette you’re even comparing it to, this number can differ wildly. Generally, it’s better to do your calculations, but a good range to estimate is 12.5 puffs. This would mean that a disposable vape with 600 puffs would be the equivalent of 48 cigarettes in one tiny disposable vape pod. This is one of the disposable vapes' most significant selling points for many.

You can easily play with this number, especially if you’re planning on using vaping to quit smoking and gradually reduce your nicotine reliance. For example, if your usual smoke break last time consisted of smoking a whole cigarette, you can start by limiting yourself to 10 puffs. Then, if you’re feeling more comfortable, you can try reducing your smoke breaks to eight puffs, then six, and before you know it, you’re able to puff lower-nicotine content e-liquid with the same amount of satisfaction.

Learn more with our article do disposable vapes expire?