How Much Nicotine Is In An Elf Bar?

Published April 29th 2022
This article looks at how much nicotine is in an Elf Bar and how strong Elf disposables actually are. 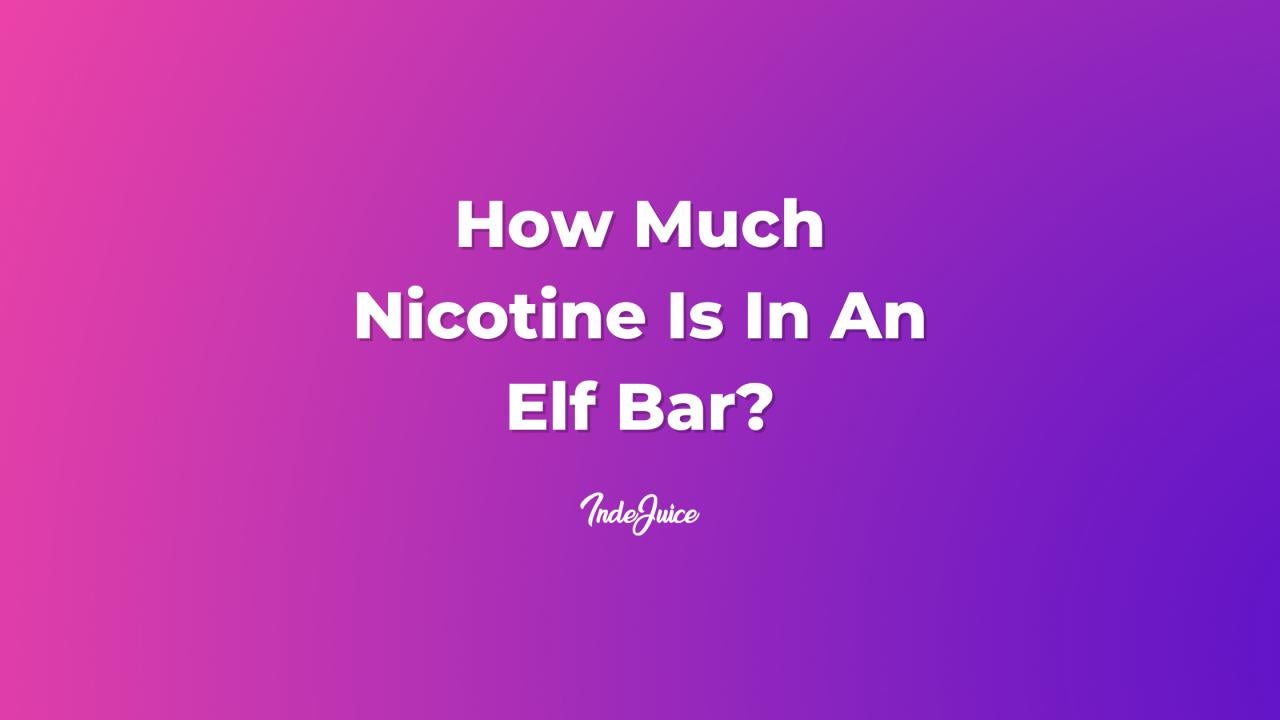 How Much Nicotine Is In An Elf Bar?

2% (20mg) is the maximum limit allowed in a 2ml vape in the UK. 20mg nicotine strength is intended for those that want to switch from smoking traditional cigarettes, providing you with an instant nicotine hit.

If you are just switching from smoking traditional cigarettes to vaping Elfbars or using e-liquids, which contain nicotine salts, will be a good idea. Since Nicotine is highly alkaline and can be harsh to new vapers, the PH levels of the nicotine e-liquid are lowered in a vape via adding benzoic acid during the manufacturing process. This makes for a much smoother draw and allows for easier absorption into the bloodstream to help you relieve that nicotine craving. This makes an elf bar perfect for beginners to vaping since the harsh feeling won’t put you off.

Filled beforehand with 2ml of e-liquid of your flavour of choice, each elf bar has around 2% nicotine content, equivalent to roughly 48 traditional sticks of cigarette.

Elf Bars are available in 20mg nicotine strength and are strong for anyone that isn't a heavy smoker or vaper.

For anyone who used to be a heavy smoker, 20mg would be a perfect strength. If you were a social smoker, 20mg might be too strong. Unfortunately, Elf Bar does not offer a 10mg option like other brands.

Elf bars do offer a nicotine-free option, which contains no nicotine. This might be an option if you just like to vape and do not want any nicotine.

What Percent Of Nicotine Is In An Elf Bar?

With 600 puffs per Elf Bar, which has been filled up ahead of time with 2ml of your choice of vape liquid, each Elf Bar contains 2% of nicotine. There are also nicotine-free options available, though these are rarer and may not be available in exciting flavours such as Coconut Melon or Apple Peach. For the options with nicotine, however, there are 10 exciting flavours for you to choose from, including Red Bull Ice, which gives you the flavour of Red Bull in a vape. No more hunting around for a can of your favourite energy drink!

For beginner vapers, it is not recommended to opt for a nicotine-free flavour, as that may jeopardise your transition from traditional cigarettes to vaping, given that the nicotine addiction would not be fulfilled. Instead, it’s best to transition to vaping something with nicotine before slowly weaning yourself off it.

How Much Nicotine Is In A 2% Elf Bar?

The answer is obvious — a 2% Elf Bar will contain 2% of nicotine. This means roughly 600 puffs or the equivalent of 20 sticks of traditional cigarettes. Many different flavour options are available, and there are also nicotine-free flavours available on the market. Of course, the nicotine-free flavours are not as recommended for beginners to vaping, as that might put you off vaping, given that you won’t be able to satisfy your nicotine cravings.

With the easier absorption of nicotine into the bloodstream via the nicotine salts in the prefilled e-liquid of your vape, your nicotine cravings are easily fulfilled. You won’t be reaching out for that cigarette anytime soon! Each vape is meant to last you without needing a recharge, and you can simply toss the vape pod out (responsibly, of course!) once you’re done with it and buy a new one as a replacement, given its affordable price.

Want to discover more about disposable vapes? Check out our articles on what e-liquid is in an Elf Bar and can Elf Bars be fake for more information.

How Can You Tell A Fake Elux Bar?

This article looks at how you can spot a fake Elux Bar disposable vape and ways to prove its authenticity.

How Long Does An Elux Vape Last?

In this article, we explore how long an Elux vape lasts including the puff count of these popular disposable vapes.

What Colour Are Elux Bar Flavours?

This article looks at what colours the Elux Bar flavours are to help you organise your disposable vape collection!