Published September 15th 2021
An overview of common problems with disposable vape devices and how to fix & resolve them. 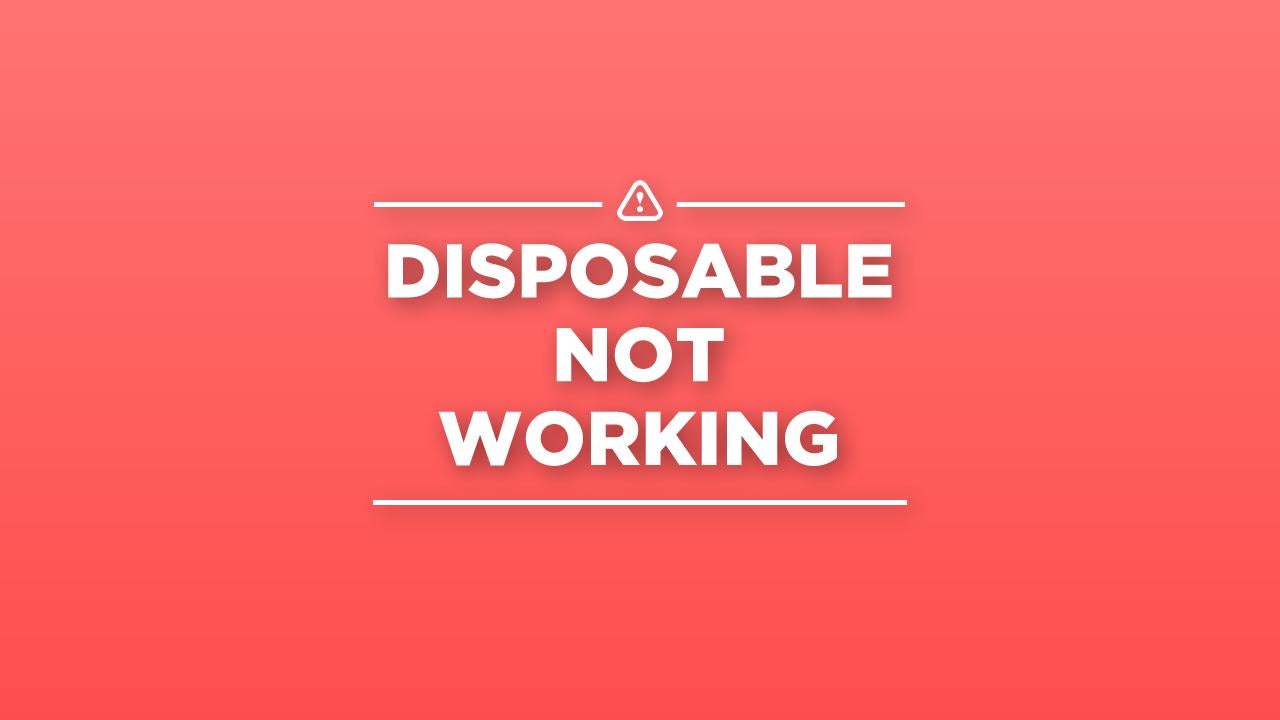 Disposable vape pens have taken the market by storm in the last year. Their simple designs alongside being small, lightweight and compact, make them an ideal device to vape on the go.

There are very rare instances where a brand new disposable vape pen you have purchased just doesn't work at all, and this can be due to a few reasons, including:

Most of the disposables on the market right now like the Elf Bar are manufactured in China; this is where the majority of vape pen manufacturers are based and are made in their hundreds of thousands every day, so you can imagine there may be odd issues with a few devices here and there.

There can be a few specific reasons why your disposable vape pen is not working or 'hitting'. We have outlined some common problems we have seen with disposable vapes. Unfortunately, not much can be done when a device has a hardware fault, in which case you are better off purchasing a new one.

Sometimes the quality of the device's battery used are not the best or the batteries used have expired due to being sat on the shelf for so long. Expired batteries eventually lose their power.

The batteries on the market are alkaline batteries, and we strongly recommend not to try and recharge these batteries as these could potentially leak and even explode.

For a disposable vape pen to work, the battery must be connected to the heating coil, which then heats up the e-liquid. In some cases, the battery isn't contacted tightly enough or connected at all to allow vaporisation to occur when you inhale. In this scenario, while you may see the LED light turn on, no vapour will be produced.

If you are not getting any flavour or e-liquid when you inhale, you may have picked up a disposable vape pen with no e-liquid inside. This can happen when disposable vapes are made in large volumes; it's simply a production fault.

As disposable vape pens contain a coil and disposables do not have any sort of temperature or power control, then in some cases, the e-liquid vapour can taste burnt. If this is the case, leave the disposable to the side to allow the vape e-liquid to soak into the coil for a while, then take fewer and quicker inhalation puffs rather than long, deep puffs.

More recent disposable vape pens such as the Nasty Fix 2.0 now have adjustable airflow control to improve your vaping experience, allowing you to vape how you like with an added function support such as an adjustable airflow.

If your coil completely burns in the disposable, then there really isn't an alternative but to buy a new disposable vape pen.

If your disposable vape pen is leaking, then this could be one of two reasons. You are inhaling too hard on the mouthpiece, which results in e-liquid spitting into the chimney, or it can be due to a manufacturing flaw.

Not Achieving The Stated Number Of Puffs

Heat Or Direct Sunlight Is Dangerous

Having your disposable vape pen at a high temperature or in direct sunlight is extremely dangerous. This can change the structure of the plastic coating of the disposable and heat up your battery. It is recommended to store the disposable between 2-25 degrees celsius.

Once your disposable vape device indicator light starts to flash/blink, then that means the battery has died, and you must throw away the disposable.

A Common issue specifically with the Puff Bar/Beco Bar is that it stops hitting after using it for a few hours. This can be due to the cotton filter blocking the intake hole. Due to the rectangular build of the Puff/Beco bars, the mouthpiece can be taken off with the sharp end of some scissors or some tweezers. The cotton filter can then be poked out and fitted correctly over the intake hole.

Buying your disposable vapes from IndeJuice guarantees you authentic products. Although we cannot guarantee that disposable vape pens will not have rare issues, the common problems are minimised dramatically.

Can You Get A Vapourless Disposable Vape?

What Are The Smallest Disposable Vapes Called?

Are you looking for a small slim line disposable vape? This article will inform you about the most portable disposable devices available on the market.

Are Disposable Vapes Worth The Price?

In this article, we will discuss whether disposable vapes are worth the price compared to smoking and the most affordable options available.

Why Does My Disposable Vape Feel Clogged?

This article will look at solving clogging issues you may encounter when using your disposable vape device and how to prevent clogs from happening again.