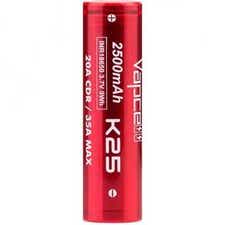 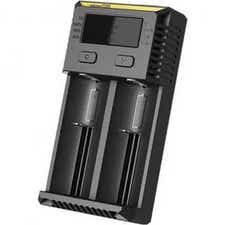 The Nitecore Intellicharger Charger supports 18650 batteries and is available from as little as £13.99 each.

What is the best battery for vaping?

Are the 18650 and AAAA batteries the same thing?

The 18650 battery is not the same as an AAAA battery. The 18650 is designed to be recharged anywhere between 300-500 charging cycles whilst the AAAA is generally not rechargeable. You should not use AAAA batteries in vape devices as these alkaline based units have not been designed to be charged and discharged on a constant basis at its nominal voltage – which the lithium based 18650 batteries have been designed for. As such, use of an AAAA battery in a vape mod can lead to serious injury and is not recommended.

How long does the battery last on e-cigarette?

E-Cigarette batteries generally last for one day. Having said that, higher power vape mods may only last for a few hours as they are mostly high output devices. Conversely, pod vape kits mostly last for an entire day of vaping despite having a smaller battery than mod vapes as they discharge less power than mods. Modular vapes generally require at least one 18650 battery that is usually rated anywhere between 1,000 and 3,500 mAh. On the other hand, vape pods usually have in-built batteries that have a capacity of 500 to 1,200 mAh.

Is it safe to charge my vape mod through the USB?

How long does a vape pen take to charge?

Vape pen or pod vapes usually have a very small lithium-based battery and charge within 1 hour. This charge time can be extended if your vape pen supports pass through charging and you continue to vape the device as it charges. Whilst all batteries, including those built into vape pods, degrade over time, the time it take to charge the device generally stays the same over its lifecycle and you should not see a noticeable increase in the time it takes to charge your vape pen the more than you use it. Although, you may have to charge your vape pen more frequently the more that you use it.

Can I use my mobile charger to charge my vape pen?

Yes, if the cable that you use to charge your mobile phone has an identical connection to your vape pen then you can use that cable to charge your vape. However, you should not use the A/C power adapter that your phone comes with as it may output much higher power than the vape pod is expecting and could result in serious injury or device damage. If you use the same cable as your mobile charger then you should either use a low power outlet or a USB on a laptop to charge your vape device – never use a third-party charging brick that is capable of outputting power that exceeds the capacity of the vape device. Most vape devices either accept micro USB or USB-C for on-device charging.