An In-Depth Review of the Depper Cola Brand

Depper Cola is an E-Liquid brand that has produced 1 e-liquid flavours across 1 products. Across all their e-liquids, they have scored an average of 4.2 stars.

Exclusive to IndeJuice, 30 vapers have rated & reviewed e-liquids by Depper Cola based on flavour, quality and how likely they are to recommend it. Below you'll find 1 flavours of Depper Cola e-liquid products ranked in order of popularity as voted for by the vaping community, featuring authentic reviews from vapers themselves.

The most popular e-liquid by Depper Cola as voted by vapers is Depper Cola Depper Cola. It has an average score of 4.2 stars, voted for by 29 vapers. It features a mix of Cherry and Cola flavours, for which you can find authentic reviews of below. 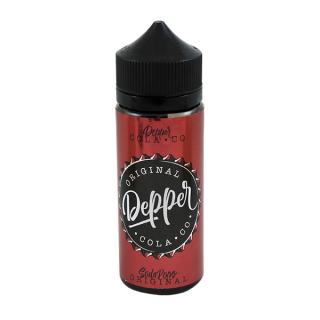 "Depper is one of my favourite soda vapes. The taste is as close to Dr Pepper as a vape juice can get, although sometimes that does hit rather harshly, it is nonetheless a very tasty vape and I've bought it several times now. It is in fact the best soda vape juice I've tried. Would recommend if you like soda vapes and Dr pepper!" - Charlie T.

"Really nice juice full of flavour just burns through your coil so quickly well does mine anyway" - Callum L.

"Tastes good, like it's supposed to. Can be a little drying on the throat though" - Amy S.