A Review of The Best Espresso Disposable Vapes

There are 2 flavour variations of Espresso disposables across 2 products. Across them all, they have scored an average of 4.3 stars.

Exclusive to IndeJuice, 20+ vapers have rated & reviewed Espresso disposable vapes based on flavour accuracy, quality and how likely they are to recommend it. Below you'll find the top 2 Espresso flavours of disposable products ranked in order of popularity as voted for by the vaping community, featuring authentic reviews from vapers themselves.

The most popular disposable with Espresso flavour as voted by vapers is Aroma King Espresso Hybrid. It has an average score of 4.3 stars, voted for by 12 vapers. It features a Espresso flavour, for which you can find authentic reviews of below.

"I LOVE this one. No wonder it is out of stock, it's absolutely marvellous. Will be watching closely for when it is back in next. Actually tastes like a genuine espresso. Good job on this." - Steve B.

"Only smells coffe, taste more like IQos or not shredded tabaco leaves, but i loved it" - Zanis S.

In second place we have Elux Vape Espresso. It has an average score of 4.3 stars, voted for by 9 vapers. It features a Espresso flavour, for which you can find authentic reviews of below. 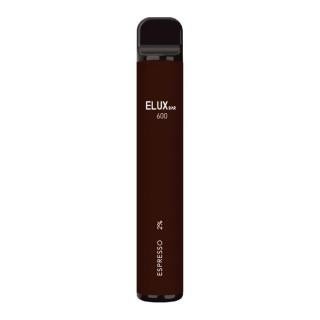 "This reminds me of the older type of babes where they’re slightly peppery, I quite like this but if you’re looking for a strong coffee taste this isn’t very strong and has a slight tobacco taste to it too" - Elise E.

"Eluxbar Espresso great flavour of coffee with a dark chocolate finish. Found the 20mg/2% extremely strong when compared to Elfbar 2% & VadesOar 2%. I would recommend trying 10mg/1%. I am a 40 a day smoker." - Grant S.

"Loved this coffee flavour, not as much of a hit as I’d expected I found I had to draw quite hard in it. However, I’d buy it again" - Natasha K.

"Nice strong flavour don’t really like the tip though prefer the cigarette ones" - Chris M.

"nice flavour, fairly consistent till the end of the vape as well which is nice" - Sam E.