What Are The Positives Of Vaping?

Published May 17th 2022
This article discusses the positives of vaping compared to conventional cigarettes. 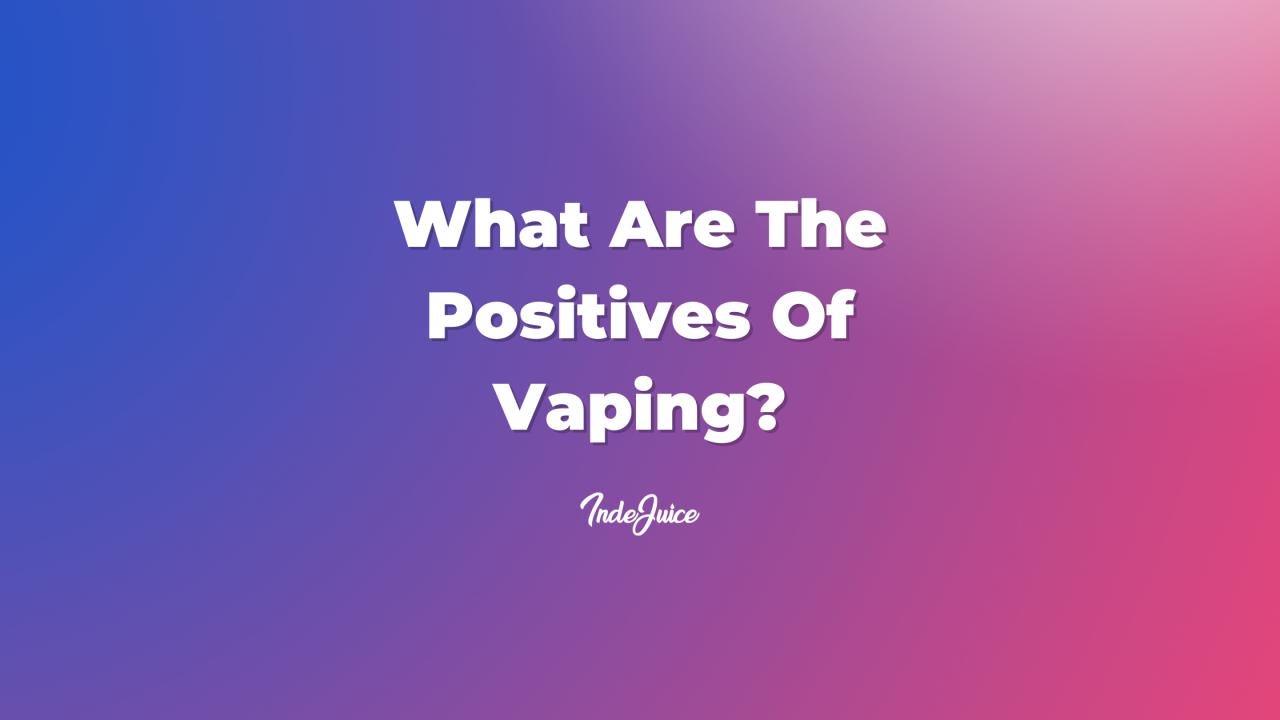 What Are The Positives Of Vaping?

There are many positive reasons to switch from smoking to vaping, such as no bad breath and no lingering cigarette odour. It is cheaper than smoking, and although it is not harmless, it is certainly less harmful than smoking.

There are far more positives to vaping than smoking, and the list is substantial.

Firstly let's look at the health benefits. Although vaping is not entirely harmless, many authoritative bodies such as Public Health England and the NHS have stated that vaping is 95% less harmful than smoking. There are several reasons why it is much less harmful. Firstly, you are not inhaling a combustible plant with thousands of additives and some of which are known to be cancerous, such as benzene, hydrogen cyanide, and formaldehyde.

Secondly, let us look at the running cost savings. On average, in 2021, a person in the UK will spend approximately £10 per pack of cigarettes (20 in a box), whereas a bottle of 10mg e-liquid at a UK vape shop will cost in the region of £5. If you are a heavy smoker or vaper, these will be used in 1 day. This will last between 1 - 3 days for a moderate smoker or vaper. For a low smoker/vaper, this should last up to a week. Ignoring the initial start-up cost of vaping (buying a device), it is guaranteed to be up to 50% cheaper to purchase a bottle of e-liquid rather than buying a packet of smokes. Initial start-up costs for many vape devices can be as cheap as £20.

Another positive is that vaping does not leave a lingering burnt tobacco scent on your fingers, breath or clothes. Many vapers who used to smoke now see that it is possible to get a nicotine fix through vaping without the horrible odour left behind by cigarettes.

Another bonus of vaping is the control of the nicotine concentration you are inhaling. Like traditional cigarettes, you can find both strong and milder tobacco; research has shown that a typical cigarette has somewhere in the region of 10mg of nicotine. However, you won't be inhaling all 10mgs of nicotine. You will probably only absorb 10% of that, so 1mg. With vapes, it is possible to increase the dosage of nicotine; in the UK, the maximum legal limit is 20mg, and your body will be able to absorb approximately 10% of that.

Many vapers start with a high dosage of nicotine (either 18 or 20mg). They can wean themselves off nicotine eventually by lowering the dosage of nicotine in the vape throughout time. E-liquid has the massive bonus of coming in various concentrations as low as 1.5mg, and some e-liquid can be purchased nicotine free.

What Are The Positive Effects Of Vaping?

There are a couple of positive effects of vaping. First and foremost is the reduced number of chemicals entering your body as you inhale.

There are thousands of additives in traditional tobacco products (cigarettes, cigars, pipe tobacco etc.), known to be carcinogens (cancer-causing). There are at least 70 known carcinogens in tobacco, including benzene, formaldehyde, polycyclic aromatic hydrocarbons and carbon monoxide, to name a few.

When vaping, there are only three main chemicals in e-liquid. Good quality e-liquid will use only pharma-grade ingredients. These ingredients are vegetable glycerin (VG), propylene glycol (PG) and nicotine. Both VG and PG are widely used in many industries, including make-up, pharmaceuticals and food and have been proven safe for human consumption. Many health bodies, including Public Health England and the NHS, have acknowledged that vaping is much less harmful than smoking.

Another positive effect of vaping is no lingering odour on your breath, fingers or clothes after vaping. Unlike traditional cigarettes, which leave a scent on your person, vaping is virtually undetectable to the olfactory sense of others.

Explore more details about vaping with our article how does vaping feel like?