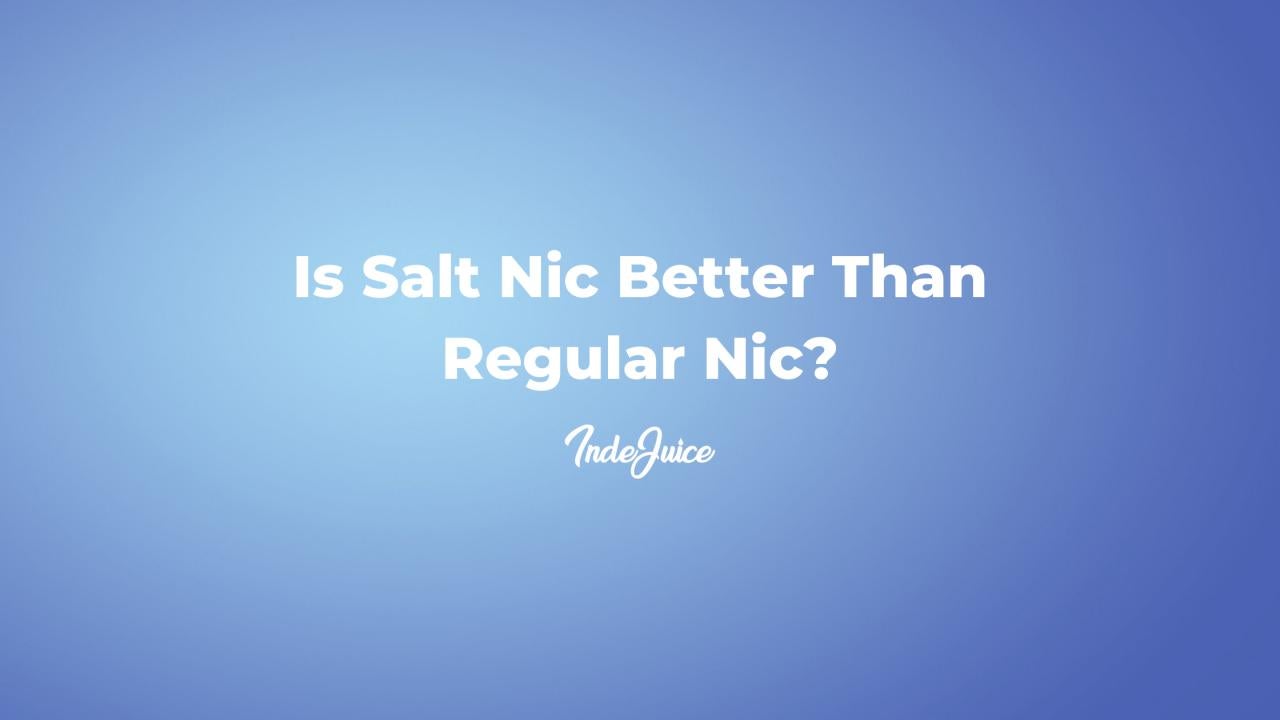 Both freebase nicotine and salt nic are used most of the time to satisfy nicotine cravings. However, they're some chemical differences which provide different ways to vape. Nicotine salt e-liquids use nicotine in their purest form from Tobacco leaves, which is in a salt state. However, freebase nicotine uses the most refined form of nicotine by using ammonia to change nicotine from its salt state; this process is called freebasing, hence the name 'freebase'. This results in increased potency.

Freebase nicotine vape juice has a high PH (alkaline) due to the ammonia being used in the freebasing process. A high PH e-liquid results in a much harsher throat hit and sometimes feels too uncomfortable for the vaper. This is where nicotine salts come in.

Nic salt e-liquid has a lower PH due to the acidic compounds added; these can be benzoic or citric acid. These acidic compounds make all the difference. They allow for a much smoother throat hit and vaping experience at higher nicotine strengths such as 20mg. They allow the e-liquid to be absorbed into the bloodstream far quicker than freebase nicotine and reduce the temperature at which the nicotine salt e-liquid is vaped.

Nic salt vape juice should be used for vapers who are heavy smokers and need a high nicotine concentration to satisfy cravings. Freebase nicotine e liquids are optimal for vapers who want large clouds and a low need for nicotine.

Is Salt Nicotine Worse Than Cigarettes?

Vaping nic salts is an alternative to smoking cigarettes. Both contain nicotine, a highly addictive substance; however, vaping is a less harmful way to intake your nicotine than cigarettes and is one of the most popular nicotine replacement therapies to help quit smoking.

When you burn a cigarette, you inhale thousands of chemicals, cancerous causing by-products including Tar and Carbon Monoxide. The World Health Organisation (WHO) estimates that over 7 million people die yearly from smoking-related illnesses, including adults and children exposed to second-hand smoke.

Vaping is less harmful than cigarettes and is deemed 95% less harmful by Public Health England (PHE). The effects of second-hand vapour are also negligible, with studies finding it does not affect bystanders. Nic salt e-liquids and other forms of e-liquid, such as freebase e-liquid, do not possess the majority of harmful chemicals inside a cigarette.

For more nicotine salt insights check out our article is nic salt harmful?